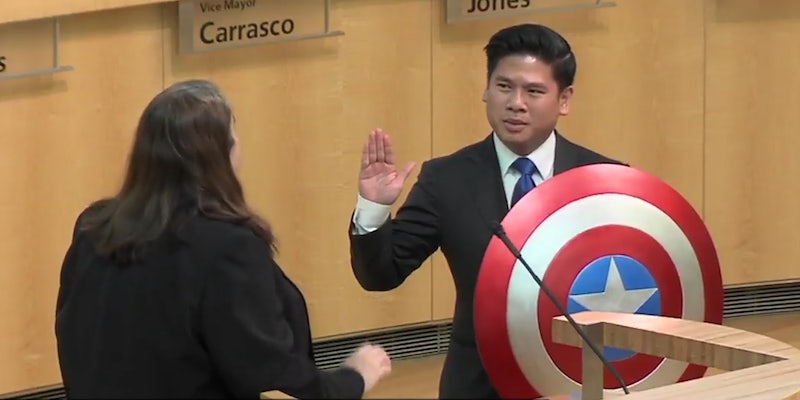 San Jose councilman is sworn in with Captain America’s shield

Instead of a Bible, Diep chose to place his hand on Captain America’s shield—whose ideals he admires—as he was sworn in as a San Jose city councilman. He wanted to “bring a moment of levity to the proceedings” and proudly held the shield during the ceremony.

A routine council seat swearing-in might not get much attention outside of local news, but Marvel fans delighted in learning that a councilman used Captain America’s shield for his ceremony.

Yes, we have video of San Jose councilman @LTDiep taking his oath of office with a Captain America shield. https://t.co/eaQY69OEXY pic.twitter.com/0lWUfjZGAW

#SanJose council member Lan Diep held Captain America shield as he was sworn in today. Says he strives for similar ideals as the superhero. pic.twitter.com/Sw4CTFImXb

“I think Captain America represents—embodies the ideals of America,” Diep told NBC Bay Area afterwards. “And those are the kind of things I’m hoping to strive for: Equal justice, fair play, and, democracy.”

We imagine he aligns more with earlier comic book versions of Steven Rogers and not the Hydra-infused current run.

While Diep plans to take his job seriously, he hopes that adding a bit of fun to local politics might engage more people and have them pay attention to it.

Whatever gets more people to pay attention to local government. #GovernmentCanBeFun https://t.co/AAlHkVqX4Z

Steve would be proud indeed.