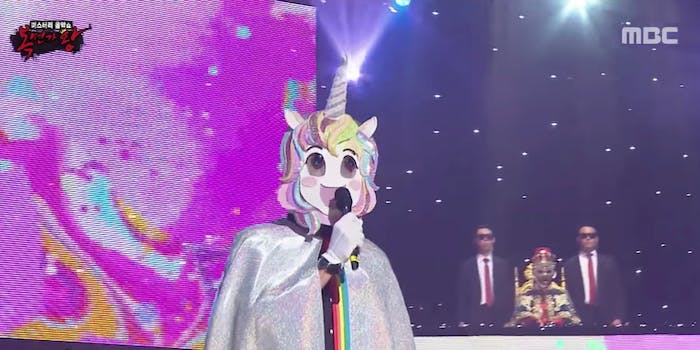 He killed this Broadway classic.

Ryan Reynolds has been everywhere lately—both as himself and the Merc with a Mouth—in his efforts to promote Deadpool 2, but this might be the most incredible (yet random) appearance yet.

He made landed on King of Mask Singer, a Korean singing competition where all of the contestants perform in masks so as to hide their identities until they’re about to leave the show. But Reynolds didn’t show up as a guest judge or a special member of the audience. He took it one step further and donned a new mask of his own.

With a unicorn mask and an impressive cape, Reynolds stepped out to perform “Tomorrow” from Annie while the audience remained unaware. Reynolds actually can sing, so it ended up being a fairly decent performance that got the audience engaged.

And then everything reached to another level after Reynolds took off the mask and shocked the crowd.

Was there any rhyme or reason to it? Well, Deadpool does like unicorns, for one thing. But it was also the sort of thing he did on his own (as much as you can with a public stunt of this nature) without letting even those closest to him know about it in advance.

“I didn’t even tell my wife [Blake Lively],” Reynolds told the panel of judges.