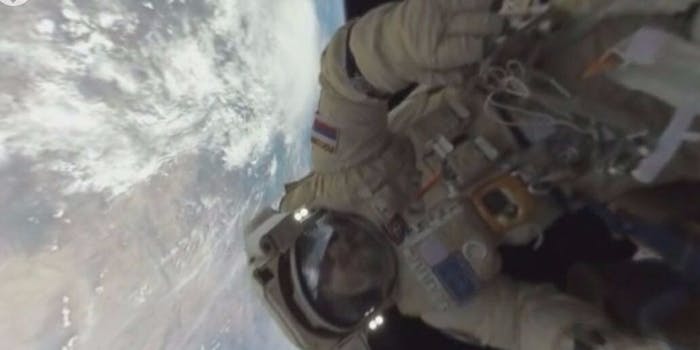 Sergey Ryazansky and Fedor Yurchikhin took a spacewalk of nearly eight hours two months ago, where the Russian cosmonauts launched five mini-satellites and performed other maintenance tasks on the International Space Station.

They also accomplished history. For the first time, a spacewalk—or as Russian state media termed it, “extravehicular activity”—was recorded with a 360-degree camera.

And the views are, quite obviously, out of this world.

If you didn’t play the video all the way until the end, make sure you scroll back to the 2:30 mark and watch as the cosmonaut flings a small measuring device into the void. Make sure you adjust the video controls so that you’re watching the astronauts and then you can turn the view to watch the round device disappear into space.

“Thanks to the project, any person on Earth can feel what it’s like to be in space from the comfort of their own home,” Eduard Chizhikov, head of Russian state media’s Space 360 project, said in a statement.