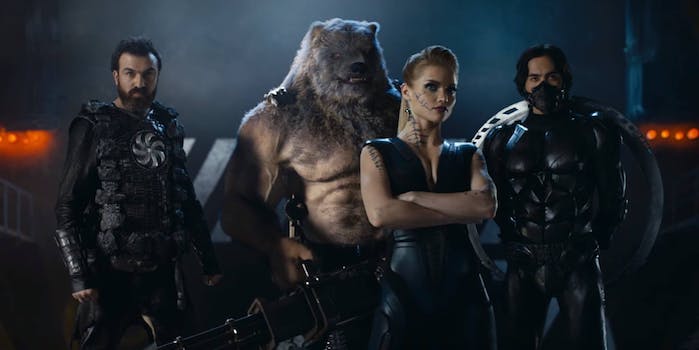 Please let this be released in the U.S.

Forget the Hulk. This Russian superhero team includes a literal bear, standing on its hind legs and firing a gigantic machine gun.

It’s been a while since a Russian blockbuster made its way to mainstream theaters in the U.S., but we’re hoping Guardians is the next one. It’s a Soviet-era superhero team movie, and the trailer looks deliciously bonkers.

Along with the shapeshifting bear-man, the team includes a guy with rock powers (think Boulder Magneto), a woman who can turn her body into water, and a Winter Soldier-looking dude with a pair of huge, gothic scimitars. You can see his super-fast powers in action in this earlier teaser clip.

The director, Sarik Andreasyan, is known for making films like The Pregnant, a comedy about a cisgender man who gets pregnant, and Mafia: A Game of Survival, a bafflingly intense dystopian sci-fi adaptation of the vintage party game “Mafia.”

Despite its contemporary appearance, Guardians is meant to be set during the Cold War, with each of its heroes representing a different nation in the Soviet Union. Of course, this kind of historical inconsistency is irrelevant in the face of a gun-toting were-bear. Our fingers are already crossed for Guardians to get a theatrical release overseas.