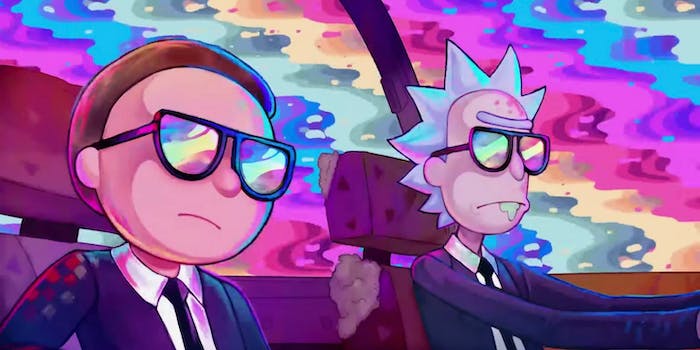 Rick and Morty’s chillest adventure yet.

Rick and Morty have traveled across the universe and through multiple dimensions on their many adventures, but their latest trip takes them through uncharted territory.

The titular duo star in Run the Jewels’ music video for “Oh, Mama,” which features Rick and Morty’s smoothest trip yet. They’re facing off against a familiar enemy—a bunch of Gromflomites set out on destroying them. But this time, they’re more than prepared to rob them, grow a Gromflomite and shoot it, and take down anyone else in their way.

Rick and Morty already performed in an intergalactic singing competition, but it’s a lot easier for them to just sit back and do their own thing while Run the Jewels provides the vocals.

The video dropped online just as Adult Swim announced that Run the Jewels is headlining the first Adult Swim Festival in Los Angeles Oct. 6-7. Information is limited, but the chances of everything getting schwifty are very high.