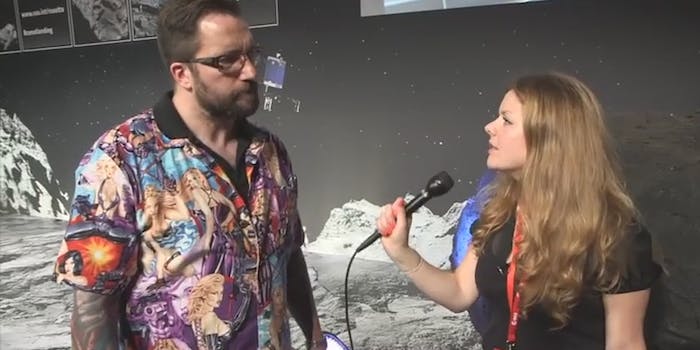 Is it too late for his shirt to be shot into space?

This week, the entire world was fixated on the Philae lander touching down on a comet. This was revolutionary. This was progress. There were breathtaking photos.

And then there was Rosetta scientist Matt Taylor’s shirt, which looked to be transported from a bowling alley in 1992.

In a Wednesday livestream about the comet landing, Taylor wore a shirt emblazoned with large-breasted, half-naked women. Atlantic tech and science writer Rose Eveleth pointed out the irony of his shirt on Twitter, and subsequently faced a flood of trolls telling her to calm down, calling her ugly, and also hoping she gets raped. Thus proving Eveleth’s point.

No no women are toooootally welcome in our community, just ask the dude in this shirt. https://t.co/r88QRzsqAm pic.twitter.com/XmhHKrNaq5

During today’s livestream, Taylor finally apologized for his choice of attire, unprompted. He was asked a question about data collection, but perhaps the past two days—and the #shirtstorm hashtag—gave him some time to reflect.

He explained, “I made a big mistake and I’ve offended many people and I’m very sorry about this.” The European Space Agency has still not commented on why exactly it was OK for Taylor to wear that shirt on a world stage. (Maybe because it has a collar?) It’s not too late, however, for the shirt to be shot into space forever.

As for the Rosetta probe, its future remains uncertain.