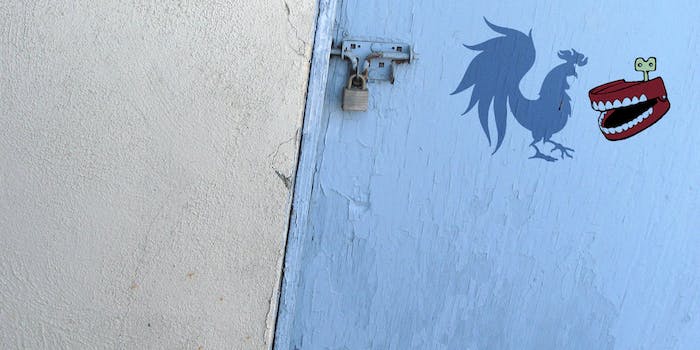 'Our instruments are Xboxes and our songs are the games we play.'

A gurney is being hurried around an arena full of spectators by two individuals in lab coats. On top of it are people dressed in scrubs, working furiously to save a life. But this is no medical exhibition, nor is it a macabre showcase. These folks are playing a video game, live and in costume, before a packed theater audience.

It’s a strange happening. Why would so many rows upon rows of people pay hard-earned money just to watch someone else play a video game?

Rooster Teeth, the company behind this venture, has built itself from the ground up within the culture of gaming. If anyone knows what works, it’s these people. And senior producer Jack Pattillo offers that the success of a live arena show about people playing video games is no surprise given how easily people relate to it.

“It’s as if you were sitting on your couch watching your buddies play video games. That’s what it is,” Pattillo said.

That doesn’t mean that the idea was easily arrived at, or that this was the plan from the start. Rooster Teeth has come a long way from its humble beginnings, and what it’s doing in front of live audiences now is just one way it’s managed to grow and evolve.

Rooster Teeth’s first big hit came with the creation of Red vs. Blue, which also stands out as among the most successful examples of “machinima,” filmed productions often staged through the use of video games.

Since its inception in 2003, more than 200 episodes of the show have been produced. The first episode now boasts more than 7.6 million unique views on YouTube, and Red vs. Blue has achieved an unassailable position in geek culture.

But for all of the success of Red vs. Blue, Rooster Teeth wasn’t satisfied. The team would introduce live-action films through their series of Rooster Teeth Shorts featuring exaggerated versions of actual Rooster Teeth crew members. The show was a success, and the inclusion of the people behind the scenes at Rooster Teeth furthered bolstered the teams’ celebrity status among their many followers.

The company was able to reach the top spot on iTunes with their popular Rooster Teeth Podcast. It delved into animation with the acclaimed RWBY series, and most recently it set about producing its first feature-length film, Lazer Team, following a successful crowdfunding campaign that raised nearly $2.5 million.

In short, Rooster Teeth has diversified, quickly and successfully. But the team never forgot their gaming roots, and it’s gaming that is allowing the company to take its show on the road.

While more than 8 million users on YouTube have subscribed to Rooster Teeth’s main channel, its gaming-specific subchannel Let’s Play boasts more than 3 million subscriptions of its own. The channel plays host to a variety of videos that focus on, simply put, people playing video games for the viewer’s entertainment.

“We wanted to interact more directly with the audience,” Sorola said. “You can upload a video (on YouTube) and watch the view-count increase. We want people seeing it live in person.”

The idea of hosting a live show followed the success of the Rooster Teeth Expo, or RTX, a massive convention hosted in Austin, Texas, for the benefit of fans, sponsors, and vendors. Seeing so many people come together under one roof in the name of mutual appreciation for Rooster Teeth and its content led people like Sorola and Jack Pattillo to wonder how else the live crowd might be harnessed.

The center stage at RTX hosted the Achievement Hunter crew, Rooster Teeth’s certified gaming entertainers who drive all that traffic to the company’s Let’s Play YouTube channel. The team got together on stage to play Grand Theft Auto V, a staple in their rotation of games to entertain live audience. And that audience turned out to be much larger than anticipated.

“We walked out on stage and sat down, looked up, and there were 4,000 people looking back at us,” Pattillo said.

It was immediately clear that there’s demand for the Achievement Hunter crew’s brand of entertainment, and the audience ate it up.

“We realized that people wanted to see (us playing) in a stage atmosphere. Rock stars do this kind of stuff, and they go on tour with it,” Pattillo said.

The comparison to a rock band is something that Pattillo capitalized on as he pitched his idea across the company. The idea that he offered was one of a group of entertainers taking their show on the road, starting locally at first and then potentially looking at other locations.

“Our instruments are Xboxes and our songs are the games we play,” Pattillo said.

While there hasn’t exactly been a great clamoring a live version of the shows Achievement Hunter and Rooster Teeth produce for YouTube, the company hopes it’s something people want—even if they haven’t realized it yet.

Some resistance to the idea is expected. People have become accustomed to being able to access such content whenever and wherever they please. The convenience of YouTube and similar platforms has come to be expected, and forgoing that in favor of buying a ticket and making the trek to a live venue isn’t something many of Rooster Teeth’s fans are accustomed to.

Pattillo offers that fans might have become a bit jaded as a result of instant gratification, and that energetic live shows are one way to shake them out of such malaise. What’s more, existing meetups with fans offer proof that there is interest in moving out from in front of the monitor.

“You see these YouTube fan meetups where people go to these things and the stars get surrounded by people wherever they go,” Pattillo said.

The live show experience also gives the crew an opportunity to try new things, both to satisfy themselves as entertainers wanting to explore their creativity and to offer to their audience something they haven’t yet experienced. The biggest hurdle, as things stand, is the first one: just convincing their fans to give it a shot.

“Once people realize what it is and what we’re doing, they’ll understand it,” Pattillo said.

Getting fans to understand was one thing. Many of them are already willing to travel to expos and conventions. As strong as the Internet culture has become, people do still want to interact in a live setting. Convincing sponsors and vendors, on the other hand, was an entirely different task.

“We had to just explain it to them as a concert,” Sorola said.

Some of those who worked with the company called the idea impossible. But Sorola was able to lean on Rooster Teeth’s experience hosting the massive RTX events as proof positive that they were both capable of dealing with a live audience, and that the live audience they sought did actually exist.

For Rooster Teeth, the challenge wasn’t determining whether or not the market was right for the act. It was managing the logistics behind putting on a live production that would measure up to the standards set by the edited studio work that Achievement Hunter in particular found so much success with.

“Performing at center stage at RTX was just one component of that show, and even then it was just for one hour with half an hour off. Here, it’s just focusing all the attention on the stage and going nonstop,” Sorola said.

In a way, the crew looks forward to the opportunity. They clearly regard themselves as professional entertainers, performers who are as fit as any other to step up in front of a live crowd and put on a worthwhile show. Even if things go off the rails, they remain confident that they’ll be able to make it fun for attendees while also pulling the show back on track.

“We’ve been doing this for a few years now so we can handle when things go awry. And we’ll make it funny,” Pattillo promised.

There’s also a belief that, even if something doesn’t quite to go plan, a live audience might be more receptive to it than a scattered audience hid behind computer monitors. After all, the people attending the show will have paid money for a ticket. It is in their own interest to find entertainment in the proceedings.

Hecklers can also be handled more easily than when they leave anonymous comments on YouTube pages.

“If someone boos in a live audience, we can turn and stare at them,” Pattillo said.

Spending enough time talking to the people behind Rooster Teeth’s foray into live entertainment is a good way to find yourself convinced that they might actually know what they’re doing when they propose the idea of playing some video games in front of a packed theater.

Of course, it isn’t quite as simple as dropping a couch at center stage and hammering away at a few controllers. The aforementioned playing of Surgeon Simulator on a rolling gurney is but one of many wild approaches the group is willing to take in the name of entertaining their paying customers.

Given all of the comparisons they make to staging a concert and touring as a rock band, the crew appropriately ended their first show by playing Rock Band. The crowd ate it up, rapturous applause were had, and as is the way of things in the industry, heads were immediately turned to the future.

“We are treading new territory. This could become the next big thing,” Pattillo said.