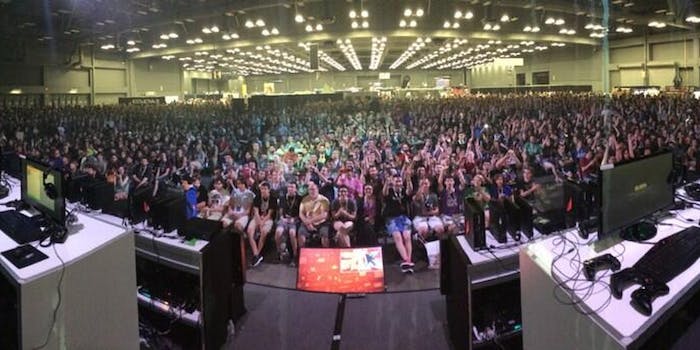 Here’s what you missed at Rooster Teeth Expo 2014

One of the Internet's best-loved video production companies draws a big crowd to its fourth expo.

Fans flew from all over to attend the 4th annual Rooster Teeth Expo in Austin, TX, this weekend.

The event centers around Rooster Teeth, an online video production company that creates live-action and animated shows centered around video games. The team is best known for their Red vs. Blue series, which started in 2003. The series gained tremendous popularity, helping the company grow into a multi-channel outlet with more than 80 employees. Currently its YouTube channel has more than 7 million subscribers.

The expo, known as RTX, is a celebration of that convergence of gaming and Internet culture. In just a few short years, the event has grown from a few hundred attendees in 2011 to more than 30,000 in 2014. Even with the increased numbers, it still feels like a small, close-knit event, with a warmer atmosphere than you’d find at E3 or Comic-Con.

The convention was littered with more fan-centric things. 343 Industries had a large presence with it’s Halo: The Master Chief Collection. Devolver Digital, known best for Hotline Miami had a decently sized booth showing off their in-development games. Independent studios like Minor Key Studios and Klobit were garnering attention with its new games Super Win The Game and Capsule Force respectively. Local Austin shops like Nakatomi Inc. were giving convention goers an opportunity to buy locally made posters. A booth for Rooster Teeth’s game based on its anime web series RWBY had a consistently large line.

Many fans came in costume, dressed up as their favorite characters from various video games and anime.

Jesse, a fan from Houston, described the expo as a “mad Internet media place” where “everyone who loves the Internet…can get together in one place.” Stephen, also from Houston, put it succinctly: “We’re just here, gathering around, having a blast.”

The general reception was that everyone there wanted to be part of that community. For many, it was a place of refuge from the outside world. At RTX, everyone’s a fan and therefore everyone’s connected.

As RTX continues to grow and larger entities start to pay attention, it’ll be interesting to see if the atmosphere changes. There was a time when Comic-Con—a multi-million dollar spectacle that now attracts 130,000 fans—could fit into a hotel hall.

But for now, it seems that RTX thrives on the most dedicated of the Rooster Teeth fans.