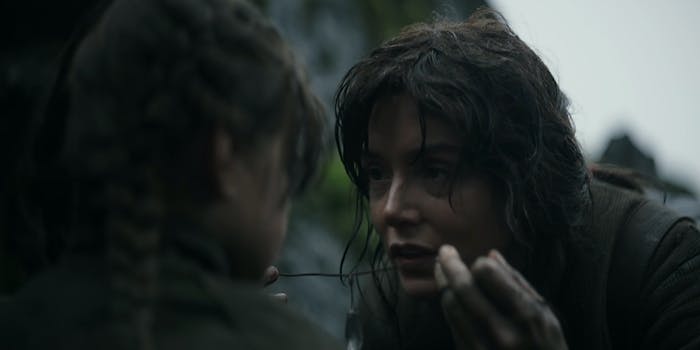 An early draft of ‘Rogue One’ had a Jedi in it

The film ended up telling a much different story.

Rogue One differs from the rest of the Star Wars saga by focusing on the struggle of everyday people instead of the Jedi, but the Jedi had a much different role in early drafts of the film.

In an interview with Yahoo! Movies, Rogue One scriptwriter Chris Weitz revealed that at one point in the scriptwriting process, there was a Jedi included in the story.

“For a long time in the story, there were Jedi around, even if only in the background,” he revealed. “Jyn’s mother was a Jedi.”

The film ultimately decided to go in a different direction to tell a different and “more interesting” story. Chirrut Îmwe, the blind monk and a Guardian of the Whills who believes in the Force, appears to channel it to heighten his senses and is the film’s closest connection to the Force—but he isn’t Force-sensitive.

“We thought that it would be more interesting to have a story without Force powers, without lightsabers,” he explained. “We could explore a period of broken faith, a galaxy without hope.”

Lyra Erso is a major character in the prequel novel Catalyst and plays a small but pivotal role in Rogue One, but some of those earlier characterizations remain. Lyra believed she could feel the Force and studied Jedi history and philosophy, but she could never use it like the Jedi. She began to wear a red sash that aligned her with those who worshiped the Force while she lived in Coruscant, the Empire capital, during its early days. She also wears a necklace with a Kyber crystal, which she gave to Jyn after Director Orson Krennic arrived on Lah’mu after telling her to “Trust the Force.”

Even though the Jedi don’t appear in the story, the Force—and its absence—still have a role to play in Rogue One.

“There’s despair because the Jedi are gone—and with them, for many, even the memory of the Force,” Weitz said. “That meant our story could be about normal people pulling themselves up by their bootstraps.”