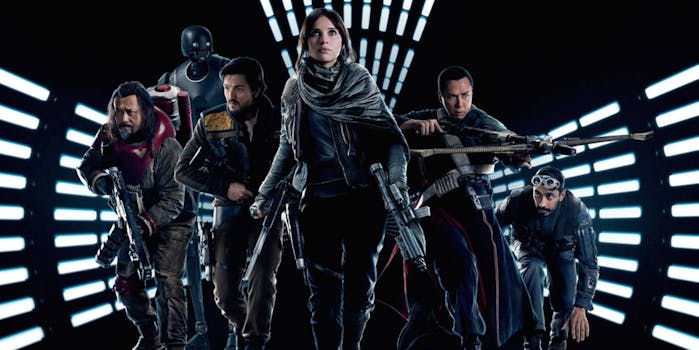 Who will survive the mission in ‘Rogue One’? Place your bets now

It's a dangerous mission—but somebody's got to do it.

There will not be a sequel to Rogue One: A Star Wars Story.

For those that have been paying attention, it shouldn’t be a surprise. As early as last December, Lucasfilm shot down the idea that Star Wars standalone films—as opposed to the new saga that started with The Force Awakens—weren’t “being designed to necessarily build new franchises” and will “very definitely have a beginning, middle, and end,” according to Lucasfilm president Kathleen Kennedy. Rogue One, which tells the story of the Rebels who stole the Death Star plans, are otherwise just a throwaway line in A New Hope’s opening crawl. Before we come into the movie, we already know they succeeded.

But as Rogue One geared up for a global press tour to promote the film and a number of clips inclined to really make you like the ragtag group of Rebels who band together for a mission bigger than themselves, Lucasfilm found itself shooting down the idea of a sequel possibly even before it came up.

Though sequel rumors keep popping up, the truth is the Rogue One sequel already exists: It’s called A New Hope. Rogue One director Gareth Edwards, even referenced it by saying that any Rogue One sequel “will be directed by George Lucas.” The great news is, it already has a trailer!

It makes sense given what we know so far, but I always figured there wouldn’t be a sequel for a much different (and darker) reason.

Since A New Hope was released nearly 40 years ago (and Rogue One’s origins came from the New Hope opening crawl), none of the Rebels who are part of Jyn Erso’s team appear in the original Star Wars trilogy. Aside from the issues that come with incorporating new characters in a prequel, there could be a couple of explanations for their absence in the Star Wars narrative.

One, they’re still part of the Rebellion, albeit in off-screen roles. That accounts for the characters who make it out alive, but they’re essentially erased from the narrative after that. Or, they aren’t around because they died in their mission to steal the Death Star plans.

Rogue One may have a foregone conclusion in the ultimate success of the Rebels’ plans, but aside from a few characters who definitely play a role in the original trilogy—Mon Mothma, Darth Vader, Grand Moff Tarkin—the film can leave characters anywhere it wants. Anyone can die, even Jyn and Cassian, who would probably make it until the final movie in any other franchise.

Is it a particularly dark way of looking at Rogue One? Certainly. Like The Force Awakens before it, the Rogue One cast is charming the pants off of fans and we’re starting to learn even more about Jyn, Cassian Andor, K-2SO, Saw Gerrera, Chirrut Îmwe, Baze Malbus, and Bodhi Rook in the days leading up to the movie’s debut. (Initial, spoiler-free reactions are largely positive.) But it’s one way to guarantee that a sequel will never happen, (although it doesn’t completely rule out an appearance on Star Wars Rebels, which occurs before Rogue One).

Who lives and who dies? We’ll leave that one up to you with your very own printable Rogue One deadpool. 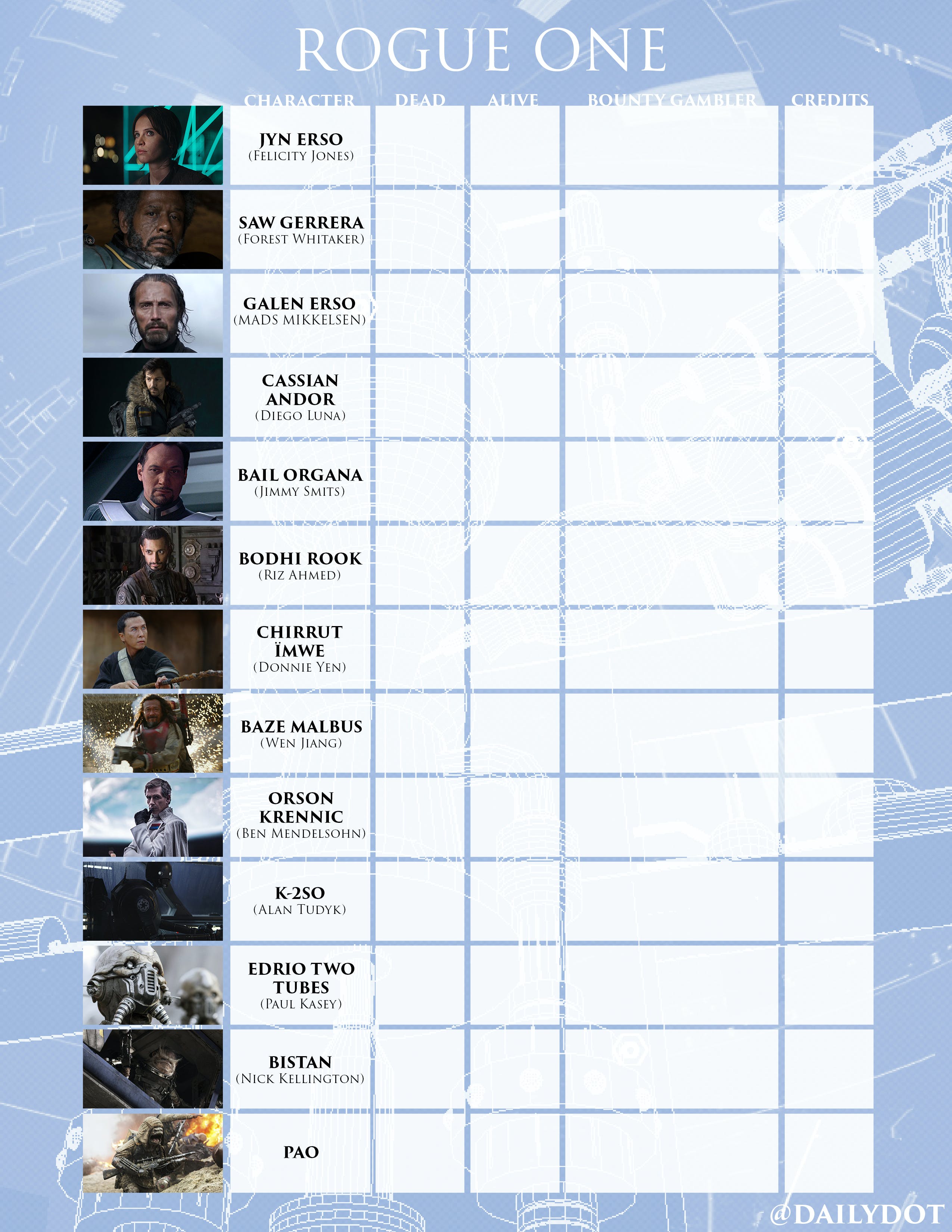 A deadpool is a kind of game where people bet on someone dying, usually with money, with Doug Stanhope’s annual Celebrity Death Pool being a popular form of it today. And although it was a small detail in the fourth wall-breaking film, there was also an actual deadpool in Deadpool (and, yes, Wade Wilson took his superhero name from the macabre betting pool).

It’s pretty simple to set up. Just print off our list and check the box on which character you think will live or die, write your name, and what you’re willing to put out on that bet. (The funds don’t have to be real.) If you have more characters than people, choose a few characters randomly or take turns like a fantasy draft. And yes, we acknowledge that one of the characters is definitely alive on this list according to Star Wars’ official website, so that’s an easy pick if you already know who it is.

If you and your friends don’t want to bother with the gambling portion, you can also just guess dead or alive for each character, and then see who in your group gets the most right.

Looking at the characters this way lends to plenty of theorizing. If anyone makes it out, where are they now? Have we finally seen Snoke’s true identity? And will this movie finally put the “Jyn is Rey’s mom” theories to rest?” There’s only one way to find out.

May the Force be with us all.