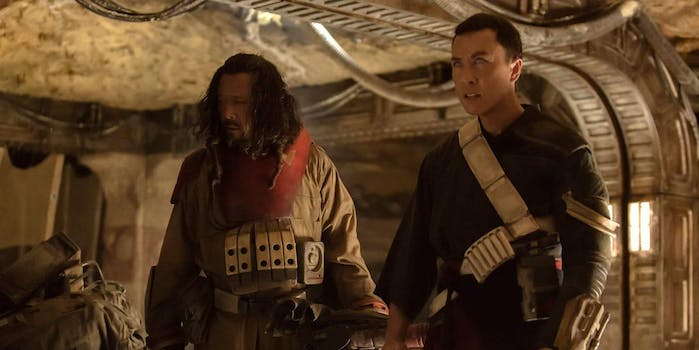 The surprising romance of ‘Rogue One’

These battle-hardened warriors are the perfect couple to reflect the dark tone of 'Rogue One.'

This article is spoiler-free.

The Star Wars saga is full of sweeping romance, both literal (Han and Leia) and metaphorical (the legendary rise and fall of Anakin Skywalker). Set during the dark ages between Revenge of the Sith and A New Hope, Rogue One is the least romantic installment to date, but it still includes a love story.

The filmmakers wisely decided not to overcomplicate matters by giving Jyn Erso (Felicity Jones) a romance arc, so Rogue One‘s emotional core is Jyn’s relationship with her father, and her journey from political apathy to Rebel Alliance leadership. The romantic love story is a quiet one that takes place in the background, between Chirrut Imwe (Donnie Yen) and Baze Malbus (Jiang Wen).

Most of the Rogue One team are strangers thrown together by circumstance, with two exceptions: Cassian Andor and K-2SO, who worked together in the Rebel Alliance, and Chirrut and Baze, who were already partners and unofficial guardians of the holy city of Jedha, a pilgrimage site for people who follow the lost traditions of the Jedi. Chirrut and Baze have an affectionate, familiar dynamic in the movie, illustrating the balance between their personalities: Chirrut is a spiritual man who trusts in the Force, while Baze is a long-suffering pragmatist who would follow his partner to the ends of the galaxy—armed at all times with a giant gun, just in case the Force doesn’t do its job.

They seem like the kind of couple who have been together so long, their conversations have evolved into a kind of oft-repeated shorthand. And without any need for further dialogue, their relationship is neatly demonstrated during action scenes and moments in the background. They fight together like a well-oiled machine, and their differing attitudes show a pleasing kind of symbiosis. Baze always keeps a wary eye out for danger, but this is only necessary because Chirrut knows Baze is looking out for him in the first place, allowing Chirrut to be more reckless than if he were alone.

Rogue One doesn’t have much time for character development among its extensive cast, but it benefits from avoiding stale archetypes delineating the roles of heroes, villains, and sidekicks. Characters like Cassian Andor (Diego Luna) and Bodhi Rook (Riz Ahmed) feel unique thanks to their complicated role in the war and the difficult moral choices they make onscreen. Chirrut and Baze are among the most interesting, partly because they’ve been around since before the rise of the Empire. The cynical, gun-toting Baze Malbus is a former assassin, while the blind yet deadly warrior Chirrut Imwe is a monk born on Jedha.

This unlikely partnership is crying out for some kind of tie-in novel or comic, so we can hear more about the circumstances that brought them together. Director Gareth Edwards says that their relationship is open to interpretation, and it feels somehow fitting that Rogue One‘s main love story could be between a pair of tired, grizzled veterans. The film’s gritty atmosphere contrasts sharply with the more optimistic tone of the main Star Wars saga, which buzzes with youthful energy and love: Anakin whooping as he wins a podrace on Tatooine; Luke, Han and Leia hugging joyfully in the X-Wing landing bay; Rey’s eyes widening in awe when she sees a lush green forest for the first time.

Attack of the Clones features a pair of doomed lovers embracing happily in a meadow, because it’s a story about people living in complacent luxury while the Republic crumbles around them. Conversely, Rogue One takes place in a grimy world of pessimism and desperation, starring distrustful characters who are intimately aware of their own mortality. Chirrut and Baze are the ideal pairing to represent this theme, dedicating their lives to protecting the Jedi legacy during the last leg of the Rebellion’s long and arduous journey before A New Hope.