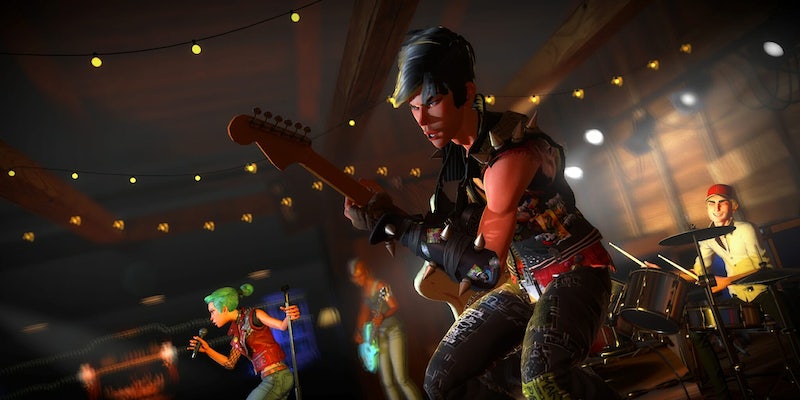 There's no reason for Rock Band veterans not to own Rock Band 4.

You’ve never come so close to feeling like you could actually bust out a kick-ass guitar solo on stage as you will when you play Rock Band 4.

The basic formula of the Rock Band series was established by the original Guitar Hero, developed by Harmonix Music Systems. You hold a plastic guitar and press buttons in sync with visual prompts in order to pretend like you’re playing a real guitar. If you hit the buttons in sync with the prompts, you hear the notes of the guitar track. If you miss, you don’t hear the notes, you fail, and the song ends.

This simple proposition blossomed from a game about pretending to play one guitar to a game where you and a bunch of friends pretend to play in a full-on band with two guitarists, up to three singers, an eight-piece drum kit, and even a keyboard, to reproduce music from a deep catalog of songs drawn from many genres stretching back more than five decades. Even if it was an extension of an earlier idea, there was nothing like Rock Band before Rock Band.

Over successive releases on the previous generation of consoles the Rock Band franchise accumulated the bells and whistles and extra features that the mainstream video game audience demands of franchise games, and without which gamers will complain that it’s just more of the same.

By Rock Band 3 these extra features included things like a real video introduction featuring live actors, extreme customization of your performer avatar, cutscenes of you and your band members hanging out at the bar after a show, and other elements that had absolutely nothing to do with pretending to play music on plastic instruments.

For Rock Band 4, Harmonix has stripped away the extraneous content and returned to leaner, more focused software with a key design innovation that substantially changes the experience by letting you feel more like a pretend rock star than ever. This is the best Rock Band to date. 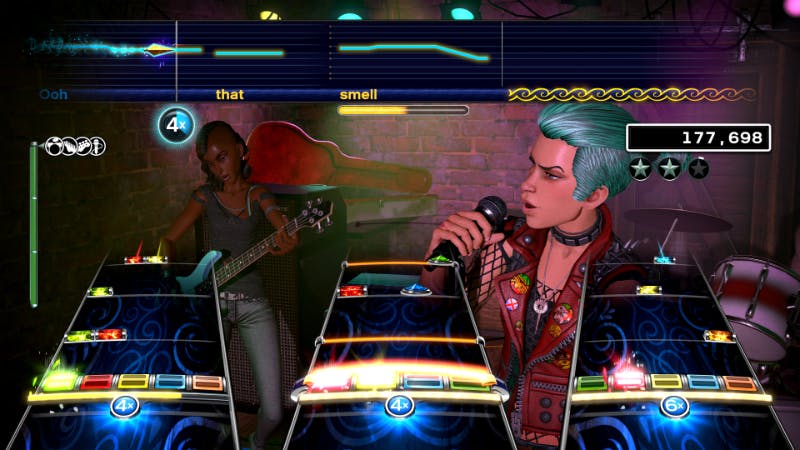 Rock Band 4 may be friendly to casual play, but it’s not a casual game if you don’t want it to be.

Choosing your difficulty in Rock Band 4 is about choosing how real you want your illusion to feel. At the easiest difficulty levels you may only have one guitar note to “play” or one drum to strike every couple of seconds, and will rarely or never use all the potential buttons at your disposal.

It won’t feel as much like you’re actually playing an instrument as that you’re keeping the song under your control. Four novices playing four parts on Easy is still enjoyable because the quintessential aspect of playing music in a group—succeeding or failing together—is still present.

At its highest difficulty level, Rock Band 4 is a kinesthetic challenge that can tax the reflexes of the most seasoned esports competitor. You may have to be strumming the guitar or hitting the drums continuously throughout the entire song. Difficult guitar parts use all five fret buttons, and make the player rapidly switch between them to the point that taking a break to alleviate forearm cramps is probably a wise idea.

One of the difficulty levels for the drummer is called “realistic drums,” because if you can play the drums in Rock Band 4 at the highest difficulty, you may as well switch over to the real deal because you’re practically doing it anyway.

If you can handle the singing difficulty set to maximum, you’re not succeeding at a difficult facsimile of singing a song—you’re actually singing it. For whoever decides to grab the microphone, Rock Band 4 is a practical exercise in professional karaoke. 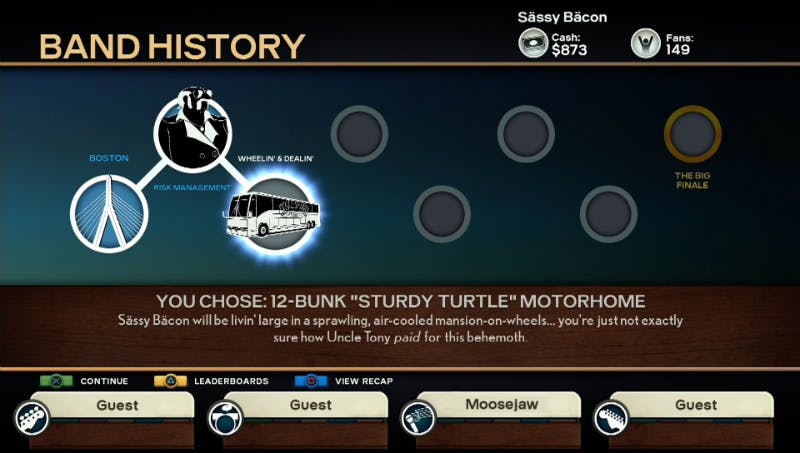 In the structured mode of Rock Band 4 you find a group and play shows to earn money and fans. The harder the difficulty and the better you perform, the more stars you earn, which unlocks newer tours with larger venues and more money to be made. And this is generally how it works in any Rock Band game. Rock Band 4 adds a vastly-improved drop-in system for groups, and makes the process of playing band gigs more democratic.

In Rock Band 3 if you were playing a song and someone else wanted to jump in with you, they had to pause the game and choose an instrument, after which the song would rewind a bit and continue just previously to where your friend interrupted the performance.

In Rock Band 4 anyone can pick up any instrument, sign in as a guest, select a difficulty level, and then wait for a timer to run down before dropping into the song. They can back out just as simply without interrupting the action.

When you’re playing a gig, sometimes the set list is decided for you, sometimes you select the set list in its entirety before the show begins, and sometimes you play a predetermined number of songs, but have to make a choice as to what song the band plays next. The choice usually comes down to voting on a selection of songs you’re presented with, or voting to choose from a different selection. Ties are broken randomly.

The seamless drop-in makes it easier for friends to join you, and the song selection by voting acts like a sort of glue to keep the new player in the mix. It’s a pair of little changes that add up to a big bonus for local play.

There’s no online multiplayer in Rock Band 4, however. If you don’t have a local group of friends to form a band with, and you aren’t into playing Rock Band solo, you’re out of luck with Rock Band 4. 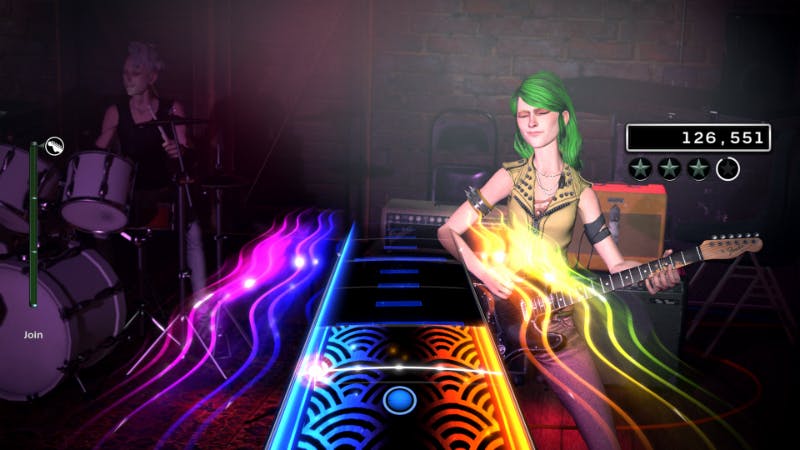 Rock Band 3 had drum fill sections where the drummer could go a little wild instead of sticking to the letter of the music. Rock Band 3 also had end-of-song-bonus sections following the tracks as recorded, where players could just whale on their instruments and get points for making noise. It felt like jamming out at the end of the song.

Rock Band 4 takes both of these ideas and combines them into freestyle solos, something entirely new for the Rock Band franchise.

In a freestyle guitar solo the player can strum-and-hold for long notes, strum individual notes on the beat, or strum in eighth notes or sixteenth notes. They can use the low-note frets on the end of the guitar neck, or the high-note frets near the body of the guitar—i.e. they operate just like real frets on a guitar do.

If you hold a single fret down while playing, you get the sound of one note, and if you hold down multiple frets while strumming, you get chords. You can hold the guitar up to bend notes, like you’re interacting with an amplifier to create feedback. And by combining all of these techniques, and staying on the beat, you create a freestyle guitar solo.

I continue to be delighted and amazed that freestyle guitar solos, even though you’d think all of these variables would lead to a horrible mess of sound, actually produce music that sounds like an improvised guitar solo.

You still have to “play” the guitar during these freestyle sections, by which I mean if you just randomly press at frets and messily hit the strum bar you’re not going to wind up with a solo that sounds any good.

But if you play on the beat and match the song in regards to tempo, key, and volume, you can wind up with something awesome. The challenge of mastering freestyle mode alone is enough to recommend Rock Band 4 to a devout fan of the franchise.

Drummers and vocalists have their own freestyle modes. All the freestyle sections are laid into appropriate spots within the songs, where they will replace solos from the original music tracks. If you would rather hear/play solos as recorded, you can just turn freestyle mode off. 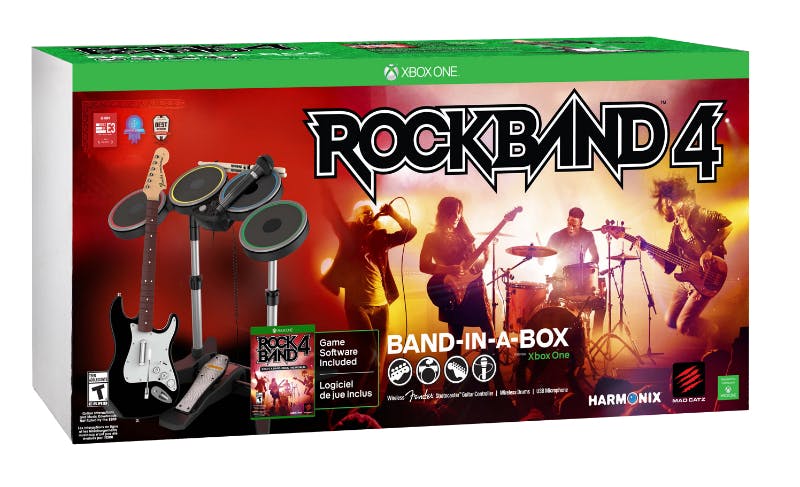 For this review, Harmonix provided a “band-in-a-box” set that includes the game, a microphone, one guitar, and the basic drum set (i.e. does not include cymbal peripherals), as well as a second guitar, all for the Xbox One. I already had a drum set, microphone, and guitar from the Xbox 360 version of the original Rock Band, all of which are wired peripherals, and a wireless Rock Band 2 guitar, also for the Xbox 360.

I therefore can’t speak to how the Rock Band 4 drum set compares to the Rock Band 2 or 3 versions. It’s wireless, is ready to support three cymbal peripherals, and the quality of the drum pads themselves is a ridiculous improvement to the original Rock Band set.

The basic dimensions of the standard Rock Band Fender Stratocaster controllers have, to the best of my knowledge, never changed. The Rock Band 4 guitars are the same black-and-white design as the Rock Band originals, but are wireless and have a fake wood finish on the neck. The obvious improvement from earlier versions of the guitars was just how easily the new guitars activated Overdrive mode, when you tilted the necks slightly up.

Xbox 360 owners require a special legacy adapter to use wireless Xbox 360 Rock Band controllers with Rock Band 4 on the Xbox One. PlayStation 3 owners with wireless Rock Band gear can use all their old stuff with Rock Band 4, with no need for an adapter. 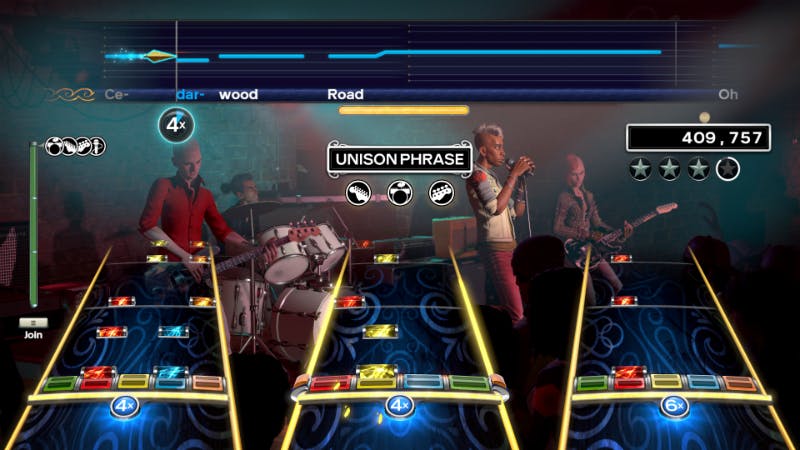 The graphics in Rock Band 4 are the improvement you’d expect from a jump to the PlayStation 4 and Xbox One, from the PlayStation 3 and Xbox 360, in terms of shadows and lighting and sharpness, but I won’t pretend that I care about the visuals in Rock Band beyond strict utility. The more people who are playing simultaneously, the less you can see of what’s going on on stage anyway.

Rock Band was never a visually demanding franchise to begin with, so you’d expect that the clearly superior graphics-processing power of the newest consoles would handle with aplomb the relatively simple, graphics-based tasks that Rock Band has to offer them. The music scroll in the Xbox One version of Rock Band 4 was never anything other than smooth as silk, and I’ll be shocked if that changes over the life of the game.

The new set list for Rock Band 4 is the usual collection of songs from a variety of time periods and genres that ships with any new Rock Band game, a little something for everyone. It can be supplemented with downloadable content.

For existing Rock Band fans, the only reason not to purchase Rock Band 4 is that you’re perfectly happy with all the instruments and music you have available to you already, and don’t foresee interest in the bevy of inevitable new tracks that Harmonix will be releasing for the PS4 and Xbox One.

And if you’re deciding whether or not to buy Rock Band for the very first time, I wish I could convey just how much I wish the instruments had been this high-quality and the song library this deep when I first started playing Rock Band eight years ago.

Disclosure: Our review copy of Rock Band 4 on Xbox One was provided courtesy of Harmonix Music Systems.