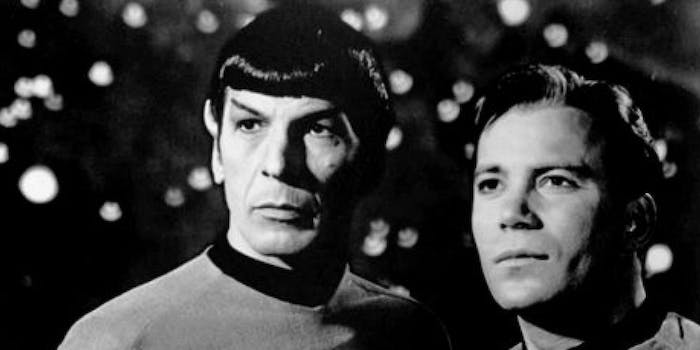 Is Roberto Orci too out of touch with the ‘Star Trek’ fandom to direct?

To boldly go off the rails as no franchise has gone before.

It looks as if the Star Trek franchise has a new commander, and it’s not the one fans were hoping for.

Instead, if Star Trek reboot screenwriter Roberto Orci is indeed the rumored choice to take over the Paramount holodeck from J.J. Abrams, then fans seem to think the franchise will be boldly going off the rails as no franchise has gone before.

If you don’t see me that much this weekend it’s because I read the news on Deadline and killed myself.

@devincf I don’t hate STID as much as most but this is back breaking for that franchise. It’s a shame, I really love that cast.

Bob Orci is like the annoying kid who showed up at the pool party uninvited. No one wants him there, but all the parents tell their kids to play nice and be friendly because his Mom is friends with other kids’ Moms. Then Bob Orci takes a piss and shit in the pool and all the kids jump out screaming in disgust. Then Bob Orci starts crying like a baby and all the parents scold their kids to again play nice. But its hard for any kid to play at all when there’s Bob Orci’s piss and shit floating in the pool. Go home Bob Orci!!!

The sharply negative fan reaction isn’t really about the fact that Orci, who co-wrote the screenplay for the first two films in the series’ revival, has never directed before—though after Abrams graduated from helming Star Trek to leading its rival sci-fi behemoth Star Wars, it would have been nice to see a director with equal cache take over the reins.

It’s also not about the fact that Orci recently split from his long-time writing partner Alex Kurtzman. With Kurtzman, Orci has co-written some of the biggest-budget bouts of incoherent gibberish ever to rake in millions at the box office: Transformers, current critical washout The Amazing Spider-Man 2, incomprehensible heist thriller Now You See Me, and Star Trek Into Darkness. Now that both partners are leaving to pursue directorial debuts, we might actually get a chance to dodge some of the bad writing decisions that led to offenses like Transformers: Revenge of the Fallen, a movie where significant attention is given to two dogs humping.

It’s not even about Orci’s known status as a 9/11 Truther, a stance he cemented during his short-lived time on Twitter by frequently sharing conspiracy theories about the U.S. government’s “real” role in the attack. Badass Digest’s Devin Faraci has tried to make sense of the incoherent mess of a plot that was Star Trek Into Darkness by pointing out its similarities to Orci’s Truther take on what happened to the World Trade Center. But even those theories, wacky as they are, might have made for a convincing plot, if other aspects of Star Trek Into Darkness had managed to meander their way into a cohesive whole.

No, fans’ displeasure at Orci stems from something much more basic: His unwillingness to acknowledge the reason Star Trek fans love classic Trek to begin with.

Orci himself comes from a storied tradition of television fantasy and sci-fi with cult followings: He got his start writing for Hercules and Xena: Warrior Princess, and co-wrote the pilot for the hit show Sleepy Hollow as well as the acclaimed sci-fi thriller Fringe. But when he writes for the big screen, he seems to leave the core principles that every good fantasy needs—worldbuilding and character development—on the doorstep of Michael Bay’s house of explosions. Faraci has argued that Orci’s problem is a willingness to cram in everything studio executives want at the expense of plot and, well, sense. But in the case of STID, Orci’s problem wasn’t one of too many cooks in the kitchen, but rather the wrong recipe altogether.

As Joseph Dickerson pointed out in his post-STID editorial for TrekMovie.com last year, the new Star Trek film series has had very little to do with classic Trek‘s mission statement—to explore “the final frontier”—and more to do with finding creative ways to blow things up in space. Even more than J.J. Abrams, who readily admitted that he didn’t even like the original series, Orci has shown a willingness to pursue his own agenda through Star Trek. If Faraci’s right, and the only way to derive any coherence from the plot of Star Trek Into Darkness is to view it through Orci’s 9/11 conspiracy lens, then it suggests that Orci’s own cynicism has trumped the very defined politics of Star Trek creator Gene Roddenberry’s original vision.

The intergalactic future in Roddenberry’s hands was an oft-cheesy but always optimistic one that showed humanity triumphing over its worst impulses time and again in order to spread enlightenment and peace throughout the universe. More specifically, progressive politics always won out against totalitarianism and isolationism. While numerous franchise iterations since have deconstructed this theme, it’s also a core principle of the original series, and one to which fans hoped the reboot would remain true.

Instead, Orci seems to have missed the point. In an interview with the Wall Street Journal last year, he said:

‘Star Trek’ has always been great because it mirrored what was happening. The original ‘Star Trek’ mirrored the Civil Rights movement. It mirrored some progressive ideas that were not exactly popular at the time, like relations with the Soviet Union during the Cold War as represented by having a Russian officer. We felt that ‘Star Trek’ was always embedded in its best forms in the world that we live in. The world that we happen to currently live in involves issues of terrorism and of war and of sovereignty. So surely recent events and the things happening in the century were part of our calculus.

But what Orci misses is that Roddenberry’s Star Trek always mirrored progressive politics by portraying them as antiquated concerns that appear outdated and quaint to Kirk and his more evolved crew. Now, in the reboot, Orci suggests instead that humanity is spreading its own poisonous corruption, not peace, throughout the galaxy.

In the original series, the worst punishment the crew of the Enterprise could devise for their enemies, the Klingons, was inflicting them with a ship full of tribbles. In the new franchise, the Federation government is so corrupt and evil that it’s willing to sabotage its own ships in order to fabricate a reason for war against the Klingons. This is not your father’s Star Trek.

Nor is it your mother’s, which is another part of the problem. In STID the few women who appeared in the film, even Uhura, were all overtly sexualized tokens who appeared at various points in their underwear. Despite the rage of many fans, Orci completely sidestepped any responsibility for the gratuitous shots of nearly naked women, instead pointing out in one interview that it was okay because “you can see Kirk half-naked as well.”

That’s not the point, and despite Orci’s gratuitous potests that he is “confused about the state of feminism” in modern society, he should know it. Combined with the backlash over the decision to erase Khan’s ethnic and cultural history by having him played by a white man in the last movie, fans have made it clear that they don’t want another Enterprise outing dominated by a white male crew with little to no equitable treatment for women and cast members of color. STID’s whitewashed Cumber-Khan seemed to forsake everything the franchise had done with his character up to that point, both culturally and individually. Few fans want this trend to continue, but it seems unlikely to change if the guy who wrote it gets promoted to director.

In his editorial, Dickerson suggested that the franchise could easily fix itself by a return to what classic Trek was best at: developing onscreen friendships and exploring cool, often profound, new worlds. But Orci’s response to Dickerson’s editorial revealed how far removed he is from the fandom that has given Star Trek such a legion of followers over time. Calling Dickerson the equivalent of “a child acting out against his parents,” he went on to imply superior knowledge of how to craft the film (“there’s a reason I write the films and you don’t”) and got into heated arguments with other Star Trek fans and commenters, calling them rude, challenging their tones, and swearing at them.

Engaging with fans this way is never a good idea, but Star Trek fans in particular have been their franchise’s lifeline at numerous points over the years. Comparing a man who’s written two scripts to a die-hard fan of a 50-year-old show doesn’t exactly yield a parent-child relationship—or if it does, it’s not structured the way Orci seems to think it is.

And that’s the core problem of Orci as the potential director of the new film. Fans, perhaps, might question whether a man who engages with Trekkies as if they’re unevolved life forms is the best person to direct a movie that needs to appeal to Trekkies.

They might also question whether a man dedicated to promoting unfounded imperialist conspiracies is the best person to update a series in which a more highly evolved life form steps in at one point and stops Kirk and his Klingon rival from going to war.

Fans might also question whether a man who’s writing for one of the most temporally progressive science-fiction franchises in this or any galaxy is qualified to do so when he purports not to understand feminism, one of humanity’s most progressive political philosophies and one that affects over half the planet. After all, if Orci can demand that audiences swallow two hours of character assassination upon Khan Noonien Singh, the least he can do in return is a cursory Google search for “third-wave feminism.”

Faraci argues that Orci has gotten where he is by making Hollywood studio executives feel listened to. But as successful reboots of cult favorites like Marvel have taught us, no one responds better to being listened to than the fans of those series. Star Trek fandom seems to have abandoned hope that Orci is listening to them.

If Orci is indeed tapped for the third Star Trek reboot, it might be the fandom’s turn to tune him out.