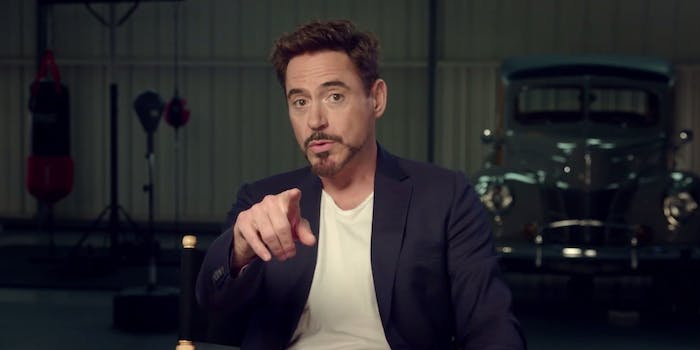 You could win a trip to the ‘Avengers: Age of Ultron’ premiere with Robert Downey Jr.

Donate $10 to a children's hospice and you could end up walking the 'Avengers' red carpet with RDJ.

Would you like to spend an exciting evening with Robert Downey Jr. before going to the world premiere of Avengers: Age of Ultron? The only possible answer to this question is yes—unless you love Downey so much that you’re worried you might embarrass yourself.

If this idea does tempt you, now’s your chance: Downey just announced the Marvel contest of a lifetime, and he’s part of the grand prize.

Marvel is partnering with Omaze, a charity network, for a contest that will send the winner to L.A. for what sounds like the most awesome date ever. All you have to do is donate $10 to the campaign, all proceeds from which will go to the Julia’s House children’s hospice.

Here’s what the winner will get to do, according to the Omaze site:

Yep, that’s a ridiculously amazing prize. Omaze has done a great job with high-profile nerd fundraisers in the past—for example, last year’s Star Wars: Force For Change campaign—so this is sure to raise a lot of money for an excellent cause.