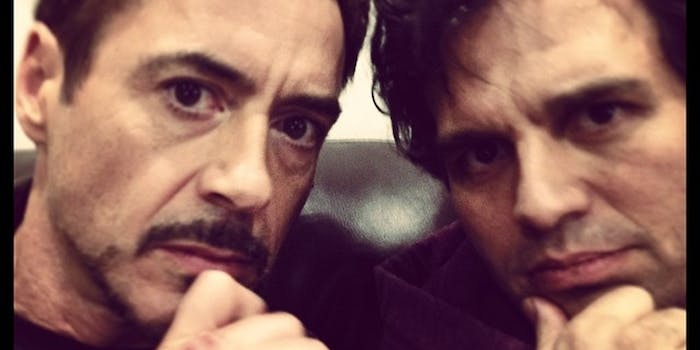 Robert Downey Jr., Mark Ruffalo are tweeting from the set of ‘Avengers: Age of Ultron’

When Robert Downey Jr. joined Twitter, a lot of us were hoping for some insider gossip from the Avengers set. And wouldn’t you know it, a couple of weeks later he’s already taking selfies with his fellow “science bro” Mark Ruffalo, A.K.A. the Hulk.

Avengers: Age of Ultron just started filming, and the team just reassembled for the first time since 2012. Unfortunately half of the actors are too busy being superheroes to bother with Twitter or Instagram, but it looks like RDJ and Mark Ruffalo are trying to make up for that. And right now, no one seems as enthusiastic about the Avengers as Mark Ruffalo.

Today was the first day of shooting “Age Of Ultron” when all of the Avengers we reassembled! Awesome sight! @Marvel

You asked for it! My first tweet from the set of Avengers: Age of Ultron with exec producer @jlatcham. pic.twitter.com/ThwoLueMyT

We’ve now reached the point where Marvel Studios is releasing so many movies that the publicity campaign from the last one moves seamlessly into the buzz for whatever sequel comes next. Chris Evans only got a couple of weeks off after publicizing Captain America: The Winter Soldier before going back to film Age of Ultron, and we’ll probably still be seeing on-set updates from that movie when Guardians of the Galaxy comes out this fall.

So, watch this space for more Ruffalo/Downey selfies, but probably not any spoilers. If any of the cast posted those, they’d probably have to start watching out for those infamous Marvel snipers.

I’m sorry @marvel. I will be better. I’m like your black sheep Avenger.