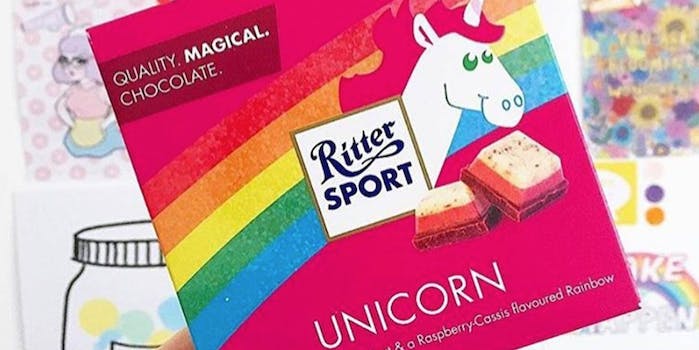 You know how chocolate fills that empty little place inside your heart?

Well there’s a super rare chocolate bar out there isn’t just a satisfying way to eat your feelings; it rainbow-blasts the sadness away. The German candy company Ritter Sport has created a beautiful and elusive confection: unicorn chocolate.

Not only is the packaging wonderfully sparkly, the chocolate itself is a combination of “white chocolate with a yogurt and raspberry-cassis rainbow.” How do you say “om nom nom” in German?

More were made for limited distribution in Germany, labeled Einhorn chocolate in German. You can still find some floating around on eBay, but they’re not cheap.

Maybe if we wish really hard—perhaps in the direction of Ritter Sport’s Twitter account—the company will give those of us in the U.S. a shot at this magical treat.