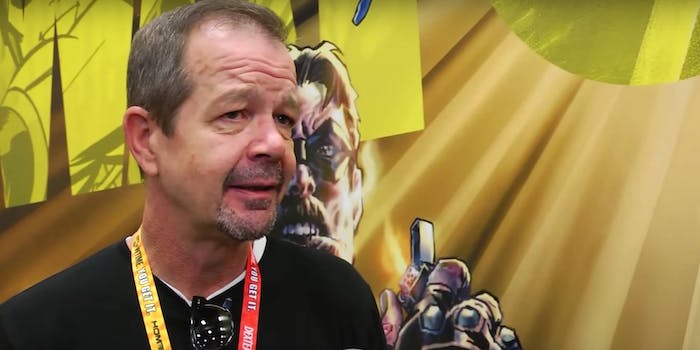 Darwyn Cooke, whose iconic comic book artwork earned him a coveted Eisner award and the admiration of millions of fans, has passed away.

The legendary cartoonist had been placed in palliative care on Friday according to a blog post from his family. Faced with terminal cancer, his family and friends worked to make him comfortable before the tragic inevitable.

Cooke was known for his distinct artistry, notably seen in the riveting The New Frontier mini-series, which effectively helped reshape the trajectory of DC comics. His contribution to Solo in 2005 netted him an Eisner award and further acclaim. Cooke also dabbled in animation, releasing a commemorative Batman Beyond short to mark the superhero’s 75th anniversary two years ago. He had since considerably slowed his output.

Earlier this year, a cancer diagnosis had been revealed, followed by the palliative care announcement. Rumors began circulating on Friday night that Cooke had succumbed to his illness, though the news went unconfirmed.

The man who gave us this work of inspired genius passed away last night. Eff cancer. #RIPDarwynCooke pic.twitter.com/ao3frEoY6p

My heart is broken. I'm holding tears back. This can't be… #RIPDarwynCooke

#RIPDarwynCooke I admire & love your work, You are a Hall of Famer. May you Rest in Peace. https://t.co/YhkZdImsHe

Reached by publicist David Hyde on Saturday morning, the family issued an official statement to the Daily Dot:

We regret to inform you that Darwyn lost his battle with cancer early this morning at 1:30 AM ET. We read all of your messages of support to him throughout the day yesterday. He was filled with your love and surrounded by friends and family at his home in Florida.

A lengthier message is forthcoming. For now, the Cooke family encourages fans to donate to the Canadian Cancer Society and Hero Initiative in his honor.