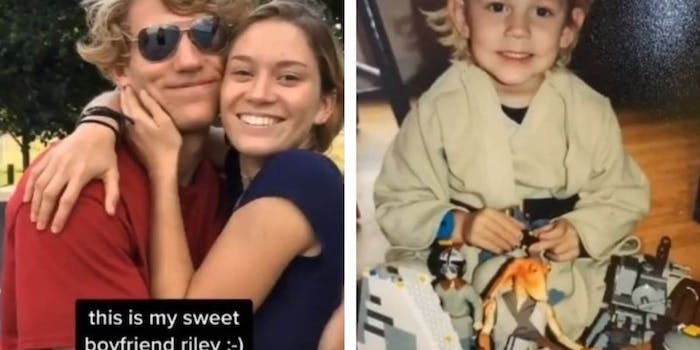 'Thanks for giving my love the perfect Christmas present ever.'

In April, a University of North Carolina-Charlotte student named Riley Howell helped contain what could have been a large-scale mass shooting when he tackled a gunman. Howell and one other student were killed that day, and Howell, who reportedly was shot three times while charging the shooter and knock him off his feet, was named a hero for his actions.

Now, he’s being honored in the Star Wars canon for his bravery and for his love of the film franchise.

Eight months after giving his life, it was revealed that in the new book Star Wars: The Rise of Skywalker—The Visual Dictionary, Howell is shown as a Jedi Master and historian.

In the Star Wars world, Howell, known as Ri-Lee Howell in the book, was the one who assembled texts known as the Aionomica. The description of Howell reads, “Jedi Master and historian Ri-Lee Howell collected many of the earliest accounts of explorations and codifications of the Force in the Aionomica: a two-volume combination of codex, correspondence, and scrapbook. Though much of its contents would later be stored in holocrons (which have since been lost), the physical books have passages written in the hands of the original sages, carefully preserved by Howell.”

Riley Howell, the student who tackled the UNC-Greensboro gunman and lost his life, is now a canon Jedi Master and historian in the Star Wars universe

After his act of heroism during the UNCC shooting, the New York Times wrote a story on Howell and said he was “a deep scholar of Star Wars, amassing a legion of Jedi action figures with his brother Ted.” Now, Howell is a part of the Star Wars universe forever.

In a letter sent to Howell’s family earlier this year, Lucasfilm wrote, “Riley’s braveness and selflessness brings out the Jedi in all of us … As a small tribute, our Story Group has included a re-imagining of Riley’s identify as a personality within the ‘Star Wars’ galaxy.”

In a TikTok posted on Monday, Howell’s longtime girlfriend, Lauren Westmoreland, showed how much the honor meant to her and Howell’s family, writing “Thanks for giving my love the perfect Christmas present ever, and making him a part of the Star Wars universe perpetually.”