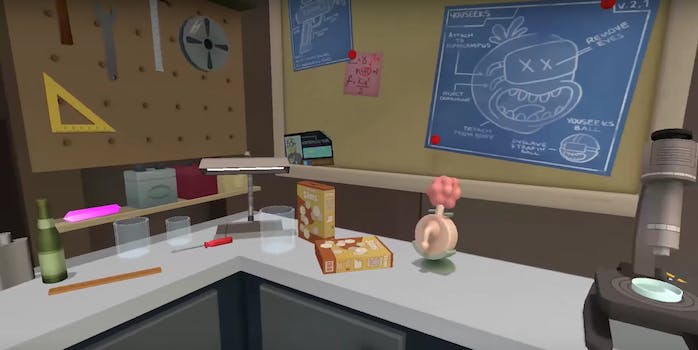 The new ‘Rick and Morty’ virtual reality game is out now

Finally, you can (virtually) hold a Plumbus!

While Rick and Morty fans were busy pining after McDonald’s Szechuan sauce, the internet’s favorite weird cartoon was brewing something much bigger: its virtual reality debut.

Adult Swim and Owlchemy Labs just released Rick and Morty: Virtual Rick-ality. The game is a fast-paced, immersive VR experience that lets players step directly into the strange and goofy world of the show and interact with the characters and scenes they already know so well. Developed by Adult Swim Games in collaboration with Owlchemy Labs, a creative VR studio based in Austin, Texas, the game is available for purchase starting (very appropriately and not surprisingly) on 4/20.

Using a room-scale VR headset, users can enter the Smith household as a clone of Morty. By following a series of cryptic directions from the 3D version of Rick, the game lets you rummage through all the nooks and crannies of Rick’s garage, stepping through various portals to alternate worlds and solving puzzles along the way.

According to Owlchemy Labs Studio Director Cy Wise, the best part about VR is the feeling of living alongside larger-than-life characters.

“It’s like living the dream,” Wise says. “Being able to hang out with your favorite characters in your favorite show is incredible. And for people who aren’t already fans, we have an incredibly accessible and intuitive VR experience.”

Still, translating a 2D cartoon into 3D real life isn’t without its challenges. Especially with a cartoon based in sci-fi like Rick and Morty, which relies on characters that push the boundaries of reality in every episode.

“Things that work on a flat screen feel unnatural in VR, so we had to solve for those problems,” Wise says. “For example, in 2D you can break some rules about the human body, such as over-exaggerated expressions, but it can feel weird and creepy at times when done in VR when the character is standing right in front of you.”

Aside from living out fan fantasies—or weird nightmares—and interacting directly with characters, the game lets fans interact naturally with their hands in a world they’re already so familiar with. Users can touch, prod, smash and throw objects, even iconic items like the plumbus.

For Owlchemy developers, the goal was to work collaboratively alongside Adult Swim animators to keep their original visions in line with the VR experience. This meant analyzing character sheets, notes, design philosophies, and movements to keep characterization consistent.

Even for someone who isn’t already a fan, Wise hopes that the game will still translate to be as universally appealing as the show.

“Part of the reason Rick and Morty is so hilarious is it taps into the cultural zeitgeist of all these broadly understood tropes from ’90s cult sci-fi media,” Wise says. “Much of the humor of the show still translates, even if someone doesn’t know the nuances.”

The game is available for purchase starting today on both HTC Vive and Oculus Rift headsets. Now we just have to wait for the invention of a VR sensor for taste to bring that Szechuan sauce a little closer to reality.