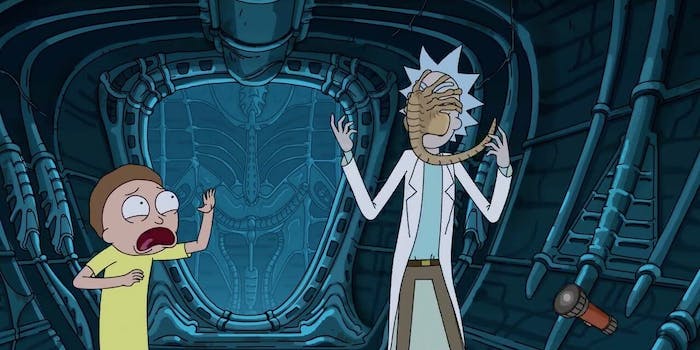 Alien vs. Rick and Morty.

Rick might’ve finally stumbled upon a surefire way to finally get rid of those Alien facehuggers once and for all.

Rick and Morty has infinite multiverses, so crossing over—and doing cross promotion—with Alien: Covenant makes sense from a plot perspective. The meta is strong as Rick and Morty answer a distress call aboard a spaceship and they literally come face-to-face with the aliens ravaging the crew on-board.

Although there still isn’t word on when season 3 will debut on Adult Swim, this glimpse into another adventure, blatant advertising aside, shows how much we’ve been missing out on this duo’s wild adventures.

The benefits of Rick’s lifestyle.

Who would’ve thought that Rick’s alcoholism would’ve come in handy? Now if only Rick and Morty could let the characters in the never-ending Alien franchise know about it.