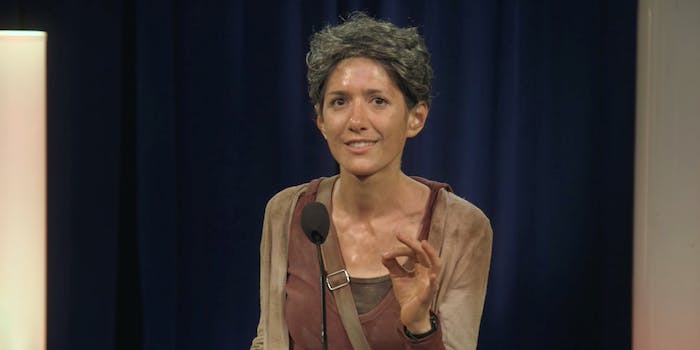 It's the verbal bludgeoning he deserves.

As The Walking Dead heads further into its post-apocalyptic hellscape, it’s become harder for some fans to continue liking Rick Grimes. And as it turns out, his castmates don’t really like him much either.

Screen Junkies, which has skewered most of your favorite movies and TV shows in its Honest Trailers series, is going all-out ahead of the Walking Dead season premiere on Oct. 23. It’s hosting The Walking Dead creator Robert Kirkman and executive producer David Alpert on its debate show MovieFights and Kirkman on Knocking Dead this week, but it’s saving its hottest burns for a good old-fashioned roast. In the latest Screen Junkies Presents, some of our favorite characters will give Rick the verbal abuse he deserves. The entire special will be available to watch on Screen Junkies’ website Oct. 18, but for now we can offer an exclusive look at what happens when Carol Peletier takes the stage.

As she demonstrates, you really don’t want to mess with Carol.

When Rick talks back in a bleaker setting, he risks losing a limb. But here, everyone (especially Negan) is all laughs as Carol throws insults lobbed towards Carl, his friends, his wife Lori (who makes a post-living appearance with Shane), and even The Talking Dead host Chris Hardwick. And like any good roast, Rick will get his own turn soon enough.

They might as well get their jabs now, because by the time The Walking Dead returns, we doubt most of them will still be laughing.