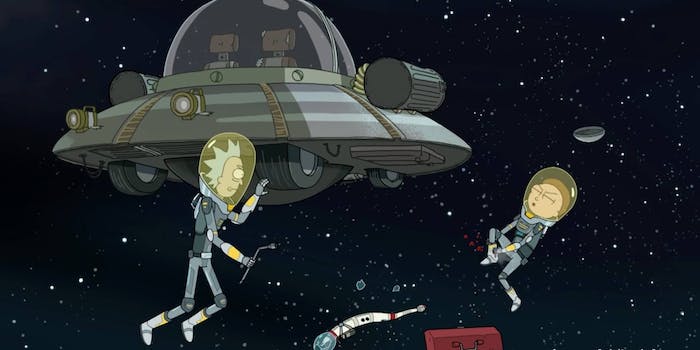 ‘Rick and Morty’ messes around with snakes and time travel

A simple premise proves to be delightfully silly.

Rick and Morty has proven time and again that it can take a single joke, run it into the ground, and try to make something even grander out of it. It doesn’t always work, but when it does? It becomes something great.

The show does that with aplomb in the mid-season finale, “Rattlestar Ricklactica,” which basically takes the concept of, “What if Terminator but with snakes?” and absolutely runs with it. Mix in Morty being the root cause of everything and Jerry once again proving that he can barely do anything without nearly getting himself killed, and you’ve got yourself what may end up being a classic Rick and Morty episode. Add in the barest of nods to the holidays, and you’ve even got a Rick and Morty Christmas episode.

As is the case with most Morty screw-ups, he had good intentions. After being bitten by a space snake who’s from a planet of 19 billion snakes and nearly dying, Morty is guilt-ridden after said snake dies; Rick is far less empathetic, pointing out that not only was that snake from a planet of 19 billion snakes, the planet it hailed from is on the verge of a race war. So Morty tries to send an Earth snake over to the snake planet, thinking that it would make up for it.

Now, anyone who’s seen pretty much any sci-fi film or TV show ever knows that when you try to introduce a new thing into an environment, it goes horrifically wrong. And Rick and Morty is no exception to that as we’re introduced to a snake society that is basically just as advanced as ours (but with snakes hissing to communicate), who then start to observe the newcomer dropped off by Morty.

Before long, we have a Terminator situation complete with time travel on our hands as one snake tries to fix the past, resulting in a bunch of robot snakes attacking Rick and Morty. Thanks to more time travel, Rick gives the snakes the tools even earlier to prevent Terminator from arriving on their doorstep.

“Now they’re gonna do it so early that it won’t involve us, and they’re gonna be even stupider with it,” Rick explains. “We’re removing ourselves from this sloppy, fucked up story and letting snake time travel eat its own tail.”

Which, of course, goes off the rails, complete with appearances from Snake Abraham Lincoln, Snake Hitler, and so many damn snakes that it’s hard to tell who’s trying to kill who to prevent some kind of fascist apocalypse from happening. It makes no sense at all, but it’s easily one of the funniest things Rick and Morty has given us this season.

While Morty’s fuck-ups have implications so big that the time police have to get involved and Rick and Morty eventually have to close their own causal loop, Jerry’s are more internally focused. We’ve seen him fret about being able to prove his worth on several occasions, which he triples down on after Rick makes Jerry temporary able to float but weighted down with shoes. Naturally, he loses one shoe almost instantly, which brings him into the air, and his stubbornness to refuse help only makes things worse—mostly for Jerry, of course.

While much of “Rattlestar Ricklactica” covers familiar territory, sometimes, if you’ve got a solid enough premise, it can make it all feel new. Who would’ve thought that it only took snakes and time travel to make it happen?