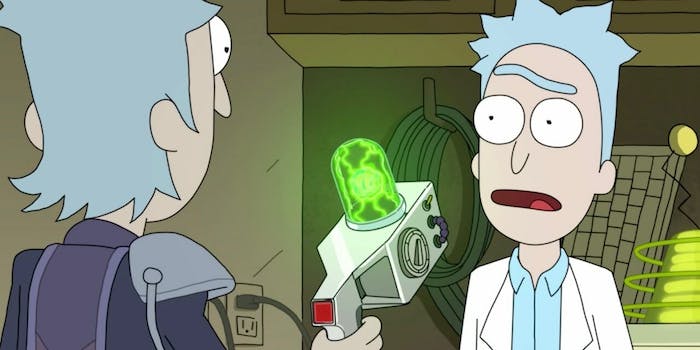 Time to get Schwifty.

After nearly two years and one of the internet’s best anti-April Fools’ Day jokes, new Rick and Morty is finally coming to our TVs.

“Stop talking about politics and release season 3,” Harmon said, while reading some fan comments that reacted to a President Donald Trump joke about syphilis.

The creators also hinted at a season 4, and said that season 3 will span 10 episodes.

Season 3 also returns shortly after Harmon addressed in a tweetstorm why it had taken the show so long to return. It didn’t have to do with any behind-the-scenes drama, but rather something much more common: He and Roiland didn’t want to make a show that was bad.

Though the livestream was announced Monday without divulging what would actually happen during the event, fans quickly speculated that Harmon and Roiland would reveal the premiere of season 3. Fans already got a taste of it after Adult Swim dropped the first season 3 episode on April Fools’ Day, but they anxiously awaited the rest of the season.

The not-a-joke April Fools’ premiere came out of nowhere, and for a couple weeks, it took over parts of the internet. Yes, fans watched the episode on repeat and dissected it, but it also sparked something none of us could’ve ever predicted: an obsession with McDonald’s Szechuan sauce, which was part of a limited-edition promotion for the 1998 film Mulan. Fans craved the Szechuan sauce, made memes about it, bid obscene amounts of money on a tub of it, and created their own versions of it to get a taste of what Rick Sanchez retreated to the depths of his mind to obtain.

If all that happened thanks to one cheeky Rick and Morty subplot, we can’t even imagine what obsessions and rabbit holes the rest of the season will provide.