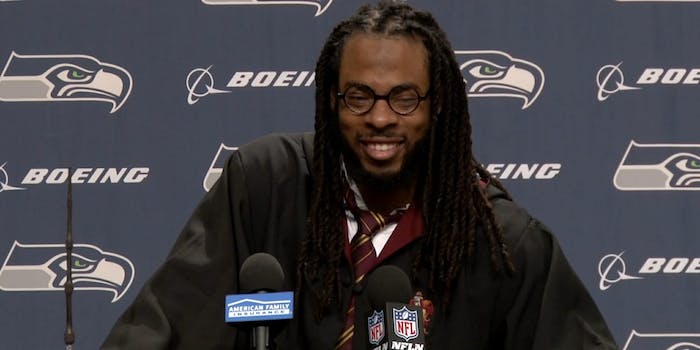 Weekly press conferences with professional players don’t often yield anything noteworthy outside of football news, but Seattle Seahawks cornerback Richard Sherman managed to conjure up some magic by embodying a wizard who’s a bit of an athlete himself.

At Wednesday’s press conference, Sherman donned his Gryffindor robes, Harry Potter’s famous glasses, and his wand as he took the stage to answer reporters’ questions. He even brought his own theme music.

50 points for the @Seahawks. pic.twitter.com/pV32xqVrZA

“You’ve got to bring your own music, this is a serious occasion,” Sherman said. “It’s Halloween. My son told me he wanted me to wear something, so it’s happening. It’s happening.”

Aside from being absolutely delightful, it’s a keen costume choice. While Harry eventually becomes an Auror in the wizarding world, he was a natural at Quidditch, having been the youngest Seeker in a century at Hogwarts. And Sherman’s feats on the field are almost magical.

Soon enough, he got to show off his Quidditch knowledge when asked which sport would be tougher. For Sherman, whose legs started to give up by the end of the game, that was an easy call. However, we wouldn’t necessarily envy playing a sport that doesn’t end until the Golden Snitch is caught, which has taken anywhere from three-and-a-half seconds to months.

He discussed last week’s game, but he also revealed his favorite Harry Potter book (Order of the Phoenix), and how he’s not quite feeling like a Muggle just yet after playing five quarters Sunday night—mostly because he’s a wizard, of course. And Sherman, who recently went to “Harry Potter Land,” which he said “felt like that was home” and wanted to show the Muggles of the world that he was a wizard.

He’s wearing the costume again to take his son out for Halloween next week and noted that the Seahawks have a few more wizards on their roster. And soon enough, we won’t even recognize him.

“He’s going to have a mask on, I’m going to have this on, nobody’s going to have any idea,” Sherman said, indicating the pair of round glasses on his head. “This is all you’ve got to do. Clark Kent did it. You’ve just got to put the glasses on. Bam, no longer Richard Sherman. Can’t even tell anymore, right?”