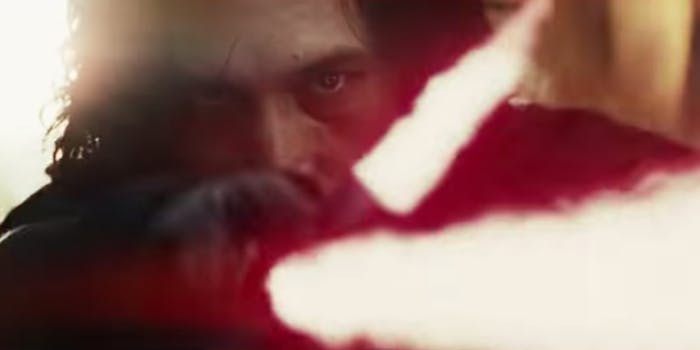 Competing hashtags reignite the fight between fans of J.J. Abrams and Rian Johnson

Amid the debate, fans raise more than $40K for Adam Driver's nonprofit.

As 2019 comes to a close, a large portion of the internet can’t stop talking about Star Wars.

Thanks to the recent release of the final film in the Skywalker saga—a series of films that has stretched over four decades—most of our minds are in a galaxy far, far away. Advertising for the movie, including appearances by the cast and crew, has been saturating the internet for months now. The constant Star Wars talk has reignited a nearly two-year old argument about the quality of Star Wars: The Last Jedi. As fans of the film argue with its critics online, several hashtags were born.

The hashtag war appeared to begin with Star Wars: Rise of Skywalker‘s promotion crusade. As the actors and director J.J. Abrams did their interview circuits, several quotes were interpreted as criticism of The Last Jedi and its director, Rian Johnson. Reacting to these apparent criticisms, fans of The Last Jedi took to Twitter to thank Johnson through the #ThankYouRianJohnson hashtag. Posts using the hashtag are mostly positive, pointing out particular aspects of the film audiences were grateful for. In response to the trending hashtag, however, viewers who preferred Abrams’ directorial style took it as a challenge. In no time, a new hashtag—#ThankYouJJAbrams—began trending.

The different hashtags started a competition of sorts between the two director’s fanbases. For Johnson, praise was mostly directed at his use of strong female characters, subversion of fan expectations, and a deep dive into emotion.

Since its trending and he doesn't get enough credit:#thankyourianjohnson for creating one of the most beautiful, thought provoking, emotional and memorable blockbusters of the decade and one of the best Star Wars movies. pic.twitter.com/i2OJoRKG0K

#thankyourianjohnson for giving the sequel trilogy a core that's rooted in mythology and emotional truth. No other Star Wars movie confronts weakness and failure as effectively as #TheLastJedi does.

#thankyourianjohnson for making me care about a franchise i've never been that interested in the first place.

the last scene between Mark and Carrie is still the most emotional moment of the Star Wars universe. pic.twitter.com/51KsDyi4f6

#thankyourianjohnson the Last Jedi may not have been perfect but at least you tried to do something different and you don't deserve all the hatred you got pic.twitter.com/bgwQm0flBz

#thankyourianjohnson for putting female characters of bravery, intelligence, and conviction at the forefront of your Star Wars chapter. pic.twitter.com/FJnqgwMfOU

Alright, I’ll join in: #ThankYouRianJohnson for telling a story that empowers the nobody, glorifies the myth, and champions the humble heroism.

Also, it gives us the most heart-wrenchingly melancholic depiction of Princess Leia we’ve ever had. And I love it. pic.twitter.com/JhqytbU2uN

After the #ThankYouRianJohnson hashtag took off, fans that preferred Abram’s films quickly created their own competing hashtag. Fans of Abram’s Star Wars take complimented the director on his ability to channel the original trilogy and for the excellent characters he introduced in The Force Awakens.

#thankyoujjabrams
For giving me a movie that reminded me of the original trilogy while being completely its own.

I laughed. I cried. I cheered. And you gave me the perfect ending.

#thankyoujjabrams for bringing us TFA when I needed Star Wars back in my life the most. I felt as if I was on Rey's journey with her, wondering what my place in the world was. Thank you for giving us Rey, Kylo, Finn, and Poe – excellent characters with excellent stories.

#thankyoujjabrams for Rey. Her relentlessly positive and kind approach to life despite having endured years of trauma is inspiring for the old – by which I mean me – and the young like my daughters. They sometimes borrow her hair but more often her courage.

#ThankYouJJAbrams for closing the book and fixing the mistakes that were made by Rian Johnson from The Last Jedi; and giving a sense of closure to a wonderful trilogy for fans of a story in a Galaxy, Far far away…

#thankyoujjabrams for concluding a 9 part saga in such a beautiful exhilarating way. Nothing but a HUGE smile or dropped jaw during its entire duration. 2nd viewing I was teary eyed the entire 3rd act.

It was fun! It was exciting! It did everything I wanted it to do and more! pic.twitter.com/kqpHJOvJ1j

There were, of course, also fans who appreciated—or hated—both directors equally. “I see #thankyourianjohnson & #thankyoujjabrams are trending and it’s just folks relentlessly trying to destroy each other over something they claim they love,” one Twitter user wrote. “All 9 movies have flaws. None of them are perfect. They all have something goofy about them. New trilogy is no different.”

I see #thankyourianjohnson & #thankyoujjabrams are trending and it’s just folks relentlessly trying to destroy each other over something they claim they love. All 9 movies have flaws. None of them are perfect. They all have something goofy about them. New trilogy is no different pic.twitter.com/rbzpOMDpIY

#thankyoujjabrams #thankyourianjohnson for some of the most enjoyable movies, people can't always be pleased but you did amazing with what you could do and honestly as a fan it's all I could ask for. ♥️ pic.twitter.com/OzWzvmhtWn

Thank you to everyone involved in the Sequel Trilogy for giving us these amazing characters and new stories that we can cherish for generations to come ❤ pic.twitter.com/maBxwtw8YQ

In response to the outpouring of both love and hate online, fans of Johnson and The Last Jedi focused their energy in an altruistic direction. According to one user, the fandom came together to “raise the annual budget for AITAF in honor of Ben Solo and spearhead a wave of love and appreciation for Rian Johnson and TLJ.”

AITAF, or Arts in the Armed Forces, is a charity started by Adam Driver—who plays Kylo Ren/Ben Solo in the films—and his wife, Joanne Tucker.

I love that this fandom’s reaction to crushing disappointment was to raise the annual budget for AITAF in honor of Ben Solo and spearhead a wave of love and appreciation for Rian Johnson and TLJ.

The charity’s mission, as stated on its website, is to “use the powerful shared experience of the arts to start conversations between military and civilian, service member and family member, the world of the arts and the world of practical action.” The GoFundMe page for AITAF has raised more than $40,000 as of Tuesday afternoon.