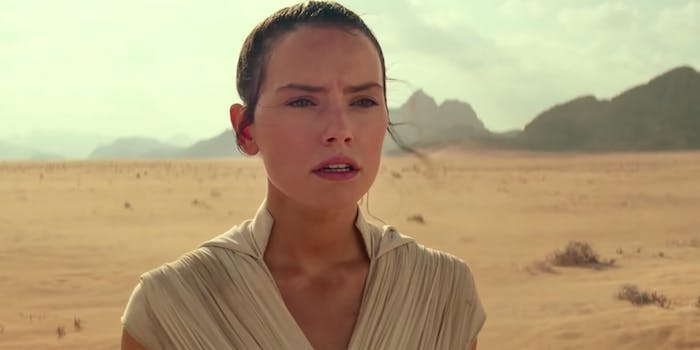 ‘Rey who?’ is the funniest meme to emerge from ‘The Rise of Skywalker’

There's a lot of possible answers.

The opinions of the Star Wars fandom, as usual, are split on the final film in the Skywalker saga.

Some fans were delighted by Rise of Skywalker, while others felt it was a disappointing end to a film series that has stretched four decades. Regardless of how they felt about the film, however, Star Wars fans are united in enjoying the memes inspired by the movie. The most recent of these revolves around the film’s final line, so if you’re one of the rare fans who have not yet seen it, consider this is your only spoiler warning.

In the final scene of the film, Rey travels back to Tatooine to bury the lightsabers of Luke and Leia Skywalker. A woman approaches Rey and asked after her name. In response to Rey’s answer, the woman inquires, “Rey who?” The line, beloved by some viewers and despised by others, became prime meme material as people imagined alternative answers to “Rey Skywalker”.

“who are you?”
“rey…”
“rey who?”
*ominous pause as she looks off to the distance*
“rey2-D2”
*star wars theme on kazoo plays* pic.twitter.com/v4IwyK8cHA

Rey memes are now all over Twitter and Reddit. Rey has been reimagined as everything from “Rey2-D2” to “Reyders of the Lost Ark” and “Rey Arnold.”

(Might’ve turned the whole thing around for me.)

Some people used the meme format to poke fun at what they saw as a line dripping with excessive fan service.

Others reimagined the ending with a line they found more fitting—and one that lets Rey be just Rey.

You probably should’ve been on the writing team!

Whether you’re team Rey Nobody, Rey Skywalker, or Reyders of the Lost Ark, this meme lets Star Wars fans write their own ending to the Skywalker Saga.