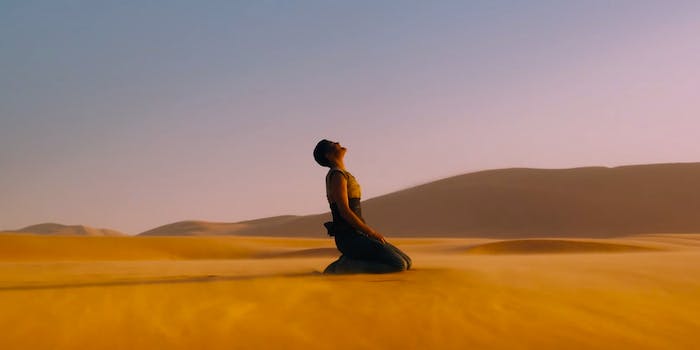 The film is nearly 100 percent fresh on Rotten Tomatoes—and 100 percent rotten with MRAs.

We haven’t seen film reviewers this gushingly superlative about a movie since last year’s Boyhood, but apparently Mad Max: Fury Road is bringing even hardened critics to their knees.

So far, the film has a 98 percent “fresh” rating at Rotten Tomatoes, with even its only rotten reviewer conceding that it’s “visually spectacular.”

But there’s one group of critics who are frothing with rage over the film because—wait for it—it’s about women.

READ MORE:
Everything you need to know about Mad Max before ‘Fury Road’

Director George Miller’s revamp of the original Mad Max films is an unashamed extended chase scene. The chas-ees are a group of women who’ve been held captive as sex slaves. Led by Splendid (Rosie Huntington-Whitely), a character who’s become pregnant by rape and subsequently fears for her life, the group of women escape and enlist the aid of the renegade Furiosa (Charlize Theron) to help them survive. The titular “Mad” Max (Tom Hardy) is a bystander who’s reluctantly swept up in all this action after the refugees go on the run, pursued by a crazed dieselpunk gang who want their harem back.

Here’s what this plot sounds like to some people who aren’t sexist:

For a movie set in a post-apocalyptic desert hellscape, MadMax: FuryRoad is awfully refreshing https://t.co/LuT29Y8d2B pic.twitter.com/1xYwEMhVRT

Why Mad Max blows past a decade of blockbusters: https://t.co/iXjvA56v9j pic.twitter.com/2VrRYi6dbg

We’re pretty sure getting Esquire and Slate to agree on a movie is a minor miracle all by itself. But over in the land of men’s rights activists—a movement that in its defense of perceived male oppression often spreads sexism—all is not golden. As noted by David Futrelle’s watch blog We Hunted the Mammoth, the community is livid at the female characters who’ve disrupted their typical moviegoing experiences by being onscreen and having a story told about them.

On the popular and controversial pro-masculinity site Return of Kings, vlogger Aaron Clarey opined that he’d been “tricked” into anticipating “what is guaranteed to be nothing more than feminist propaganda” that has “ruined and rewritten” the Mad Max franchise:

The truth is I’m angry about the extents Hollywood and the director of Fury Road went to trick me and other men into seeing this movie. Everything VISUALLY looks amazing. It looks like that action guy flick we’ve desperately been waiting for where it is one man with principles, standing against many with none.

Even though Hollywood has spent literally a full century making films that match that description, Clarey apparently was eager to add Fury Road to the pile. Though at first he was hyped about the films, Clarey wasn’t happy that:

Nobody barks orders to Mad Max.

And after learning that Miller had hired Eve Ensler, author of the Vagina Monologues, as a consultant, Clarey realized he’d been “duped”:

“I was forced to accept reality. Fury Road was not going to be a movie made for men. It was going to be a feminist piece of propaganda posing as a guy flick…

[F]eminism has infiltrated and co-opted Hollywood, ruining nearly every potentially-good action flick with a forced female character or an unnecessary romance sub-plot to eek [sic] out that extra 3 million in female attendees…

…Hollywood has [had] the audacity to remove the name sake of a movie franchise called MAD FREAKING MAX, and replace it with an impossible female character in an effort to kowtow to feminism.

Clarey clearly hasn’t seen the film, or apparently even read much of the plot description, or he’d know that his description of Fury Road as having “a forced female character or an unnecessary romance sub-plot” is totally inaccurate. And given that reviews have typically been describing Theron’s character as intense and magnetic, it’s hard to see what about her is actually “impossible,” unless Clarey thinks it’s impossible that women would have survived the apocalypse to begin with.

Then again, Clarey and the nearly 500 commenters his piece garnered weren’t really interested in nuance, but rather in rallying each other to boycott the film in the name of manliness.

“Women and feminists in general have without a doubt, proven that they are dysfunctional by nature and cannot be trusted with anything. And this movie helps to prove it,” reads the most upvoted comment. “Always maintain your masculinity.”

In response, the rest of the Internet has gotten a good chortle—while, we presume, facepalming a great deal:

"Always maintain your masculinity." I swear to god, you can snap this type of masculinity in half with a feather https://t.co/nxBKGSnADI

I was going to see Mad Max anyway, but this article on the response to it is just amazing. https://t.co/Sx6yep8aVv

There you have it, folks: Instead of making dudes less excited about Fury Road, Clarey’s rant is making them even more hyped. Keep up the good work, my bros.

It must be said that Mad Max isn’t without its faults; Clarey rightly pointed out that Ensler isn’t exactly the best person to represent sexual enslavement in the Congo. And the film has already come under fire for allegedly having only one non-white actor in the entire movie, despite being filmed on location in Namibia.

Still, if you’re looking for a high-octane dose of female empowerment this weekend, you can skip Pitch Perfect 2 and head on the chase with Mad Max instead.

You can pretend all those spectacular explosions are blowing up tired gender stereotypes—or maybe just sexism on the Internet.

Correction: The Return of Kings website does not align itself with the men’s rights movement.