Another example of how VR ups the fear factor.

The transparent grey ghost of a dead girl only appeared on the stairs for a fleeting moment, maybe only a frame of video, but she nearly made me jump out of my skin.

Developer Capcom at E3 last week revealed the new Resident Evil 7 playable teaser, Beginning Hour, through the PlayStation VR system. The teaser is not a slice of the final game. It is more a standalone experience, similar to the way the P.T. demo would have related to Silent Hills, just a demonstration of how the final game is going to feel.

Resident Evil 7 will be played in first-person perspective instead of in the traditional over-the-shoulder, third-person camera view that Resident Evil games have used since 1996. You don’t have to play the game in PS VR. In fact, the teaser has since been made available for download for free on the PlayStation 4.

You can play the teaser yourself to get an idea as to what the experience was like in VR, but take any scare you get while playing the teaser and multiply it by at least a factor of 10. 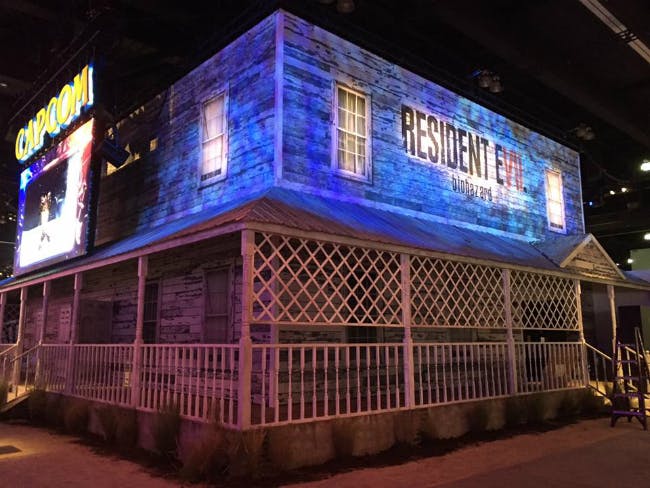 Capcom did a nice job of setting up the Resident Evil demo booth at the Expo, building a creepy, dilapidated house right on the show floor. It was a little goofy, being surrounded by all the lights of other booths, the big screen advertising Capcom games on one side of the house, and the loud noise of all the games being demoed nearby

The room that Capcom sat players in for the demo was dark and much more quiet. I didn’t have advance notice that the demo would be presented in VR, which just added to the sense of foreboding. 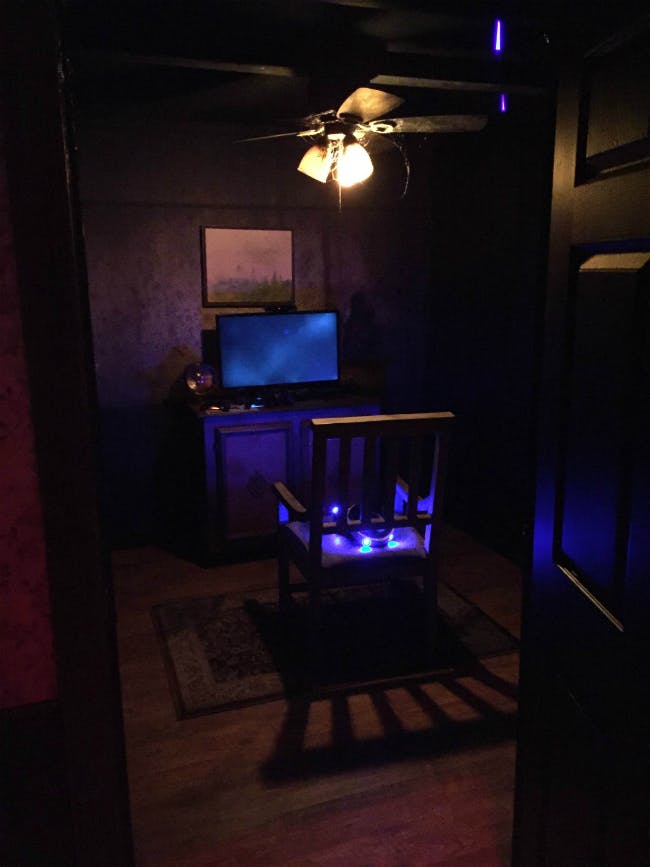 Right this way, sir. No, we won’t lock the door behind you…

In addition to being presented entirely in first-person, Resident Evil 7 is also going for a photorealistic look. Both factors make the game more creepy regardless of whether it’s in VR or not.

As a sit-down game versus a stand-up, room-scale VR experience Resident Evil 7 will be a little easier to handle than something like The Brookhaven Experiment, where more of your body is projected into the simulation and thus the sense of threat is higher. But don’t take that to mean that the RE7 demo in VR is not a thing to be taken seriously.

In the demo you wake up on the floor in the living room of a decrepit, rusty, water-stained house. A television in the corner shows nothing but static. A subtitle prompt tells you to get out of the house—as if you required the prod. You probably don’t, especially after you hear all the thumping noises over your head.

Your flashlight shines in the direction you’re facing, and in VR you’re moving your head around rather than moving a control stick. The gloom swallows up the light quickly. The flashlight is useless for peripheral vision, which meant I had my head on a swivel the entire time I was searching the house for a way out.

I made a effort to keep my back against the wall at all times, and before I walked through a doorway, opened a drawer, or looked in a container I made damned sure to look all the way around me—twice. The floorboards were constantly creaking, I was being hit with jump scares, I had no idea where and when something was going to leap out at me.

The front door was locked. I found a video tape that I took back into the living room. The sound of the static was louder than before. I slid the tape into the VHS player on top of the television, and then the VR view cut out, to be replaced by a floating pane that displayed a color bar test pattern.

When the tape began I was snapped back into VR, this time from the perspective of a cameraman. The color was washed out, as if I were in the video. I followed a television producer and a host into the house in which I was locked back in the real world. We were scouting it as a location for a shoot. The producer went missing and the host and I went looking for him.

The ghost only appears for a few frames, just long enough for you to not be sure if she was there at all. But imagine seeing this pop into your vision no more than what appears to be 10 or 15 feet away. 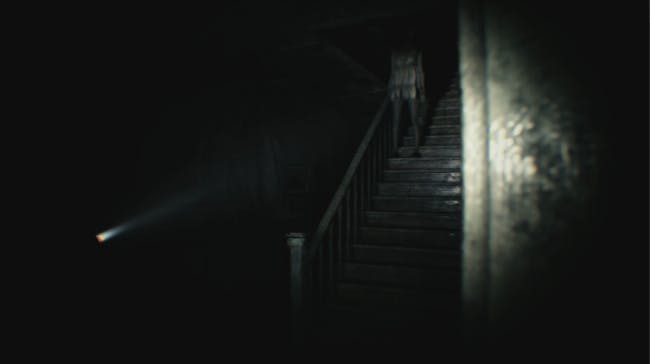 “I’m not going to walk near him,” I said aloud. I swear I heard the PR rep in the room laughing. “Nothing good is going to happen when I walk over there.” I was correct. 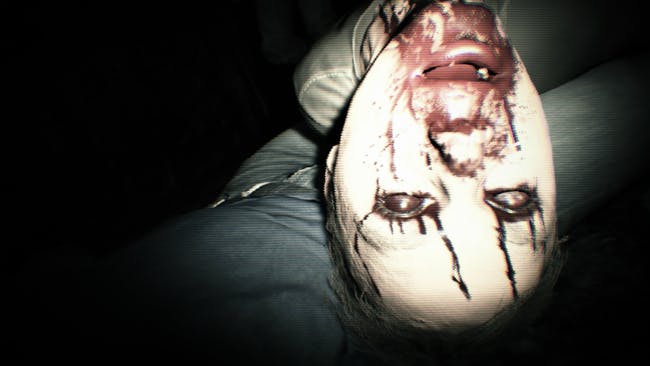 Some VR developers will tell you that putting jump scares into a simulation is fundamentally wrong and constitutes a betrayal of trust. The user is putting their trust in the developer not to put them in jeopardy on account of losing themselves in the illusion.

You could also argue that feeling terror in VR is a demonstration of the power of the medium, a perfect indication as to the degree to which the user is lost in the simulation.

I probably won’t be able to resist forcing myself to play Resident Evil 7 in VR mode, just to say I at least tried to. And how I feel about the morality of horror games in VR will be determined by whether or not I’m able to keep the VR rig on the entire time or, as whenever I’ve tried to play The Brookhaven Experiment, I wind up ripping the rig off my head because I can’t stand it anymore.