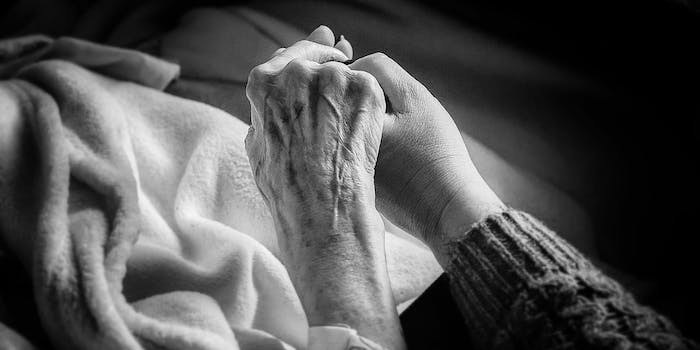 Don't hold out hope for immortality.

Humankind has long sought eternal youth, but sadly our hopes and dreams of living forever have been crushed by new research that suggests it is mathematically impossible for multi-cellular organisms to avoid kicking the bucket. This news, brought to you by researchers Paul Nelson and Joanna Masel of the University of Arizona, is unlikely to end the human quest to beat death, but perhaps it’ll be easier to embrace those stubborn grey hairs and wrinkles.

Aging is the end result of cells slowing down and becoming less functional. For example, wrinkles are visible proof that fibroblast cells aren’t as efficient at producing the collagen our skin needs to look firm and young. Scientists long theorized that aging could be avoided by getting rid of or fixing these underperforming cells. They figured that if the cell’s DNA could be repaired, ultimately reversing the effects of decaying biochemistry, aging could be avoided.

Some cells slow down with age, but others speed up and reproduce like wildfire. These cells sometimes create abnormal cells we commonly refer to as cancer. According to the researchers, people tend to have more cancer cells—even if they’re not symptomatic—in their bodies as they age, thus creating the ultimate conundrum.

Masel explained how this turns into a math problem.

“You might be able to slow down aging but you can’t stop it,” Masel said. “We have a mathematical demonstration of why it’s impossible to fix both problems. You can fix one problem but you’re stuck with the other one. Things will get worse over time, in one of these two ways or both: Either all of your cells will continue to get more sluggish, or you’ll get cancer. And the basic reason is that things break. It doesn’t matter how much you try and stop them from breaking, you can’t.”

This leaves humans with two options: death by aging or death by cancer. Neither sound particularly pleasant, but both reflect the reality that the only thing certain in life is death.