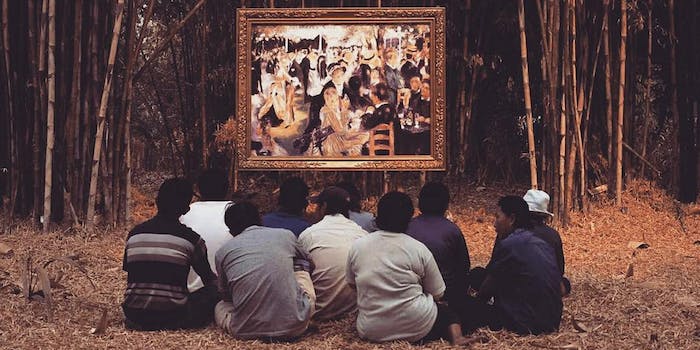 The expected “dozens” of protesters turned out to be like six people, but a dedicated group of Renoir haters and anti-fans still turned heads when they showed up to picket Boston’s Museum of Fine Arts yesterday.

#RenoirSucksAtPainting is for the children!

Hey Boston! The #RenoirSucksAtPainting Movement is announcing that we will be PICKETING TREACLE this Monday In #Boston. @mfaboston has many a #steamingpile and its HIGH TIME its curators are held to account for their aesthetic bankruptcy. Remove #Renoir or get a visit from us. See You There!!

Of course, there are plenty of legitimate reasons to personally hate Renoir (and many of the other French Impressionists). As Geller notes, “His antisemitism, pederasty, orientalism, racism, chauvinism et al ad nauseum, are all paths that get us to [the] answer of how Renoir sucked.”

But ultimately it’s about aesthetics. “I definitely think Renoir is the worst painter,” Geller told the Boston Globe.

Whether or not you agree (we think Gaugin’s work is pretty fug, for the record), it’s hard not to admire this movement’s passion—and their dedication to ripping a 19th-century “master” a new one.