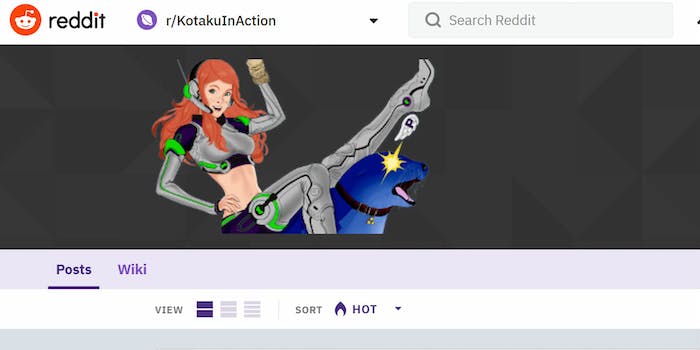 Reddit is cool with allowing the pro-GamerGate forum to continue onward.

The subreddit KotakuInAction began life as a pro-Gamergate/anti-SJW forum dedicated to commenting on a perceived liberal agenda in geek culture media, and it was the source of no small amount of harassment campaign organizing. Its creator, a Redditor by the name of David-Me, seemingly had a change of heart in recent days, and he attempted to lock down the forum following a lengthy screed that described KotakuInAction as a “monster” and a “virus.”

Reddit has since reopened the forum and resumed its normal operations.

User David-Me’s post on Friday detailed his original intentions for the forum. David-Me said that at first, he expected hardly anyone to join the forum, but within a few days, it was overwhelmed by thousands of individuals flooding in.

After some amount of success, David-Me described the “dark time” the forum entered as its membership became more and more toxic, employing racist and sexist language. Additional Gamergate forums were created on platforms like 8chan as a result of the community born in KotakuInAction.

“This was the best and worst thing,” David-Me wrote. “The monster was now a virus. We banned links to, and then mention of certain links and topics. Now we became the enemy.”

Evidently, the toxicity on KotakuInAction, which has more than 96,000 subscribers, and the subsequent forums it spawned grew so bad that David-Me removed himself from the top moderator position, and he attempted to delete the forum.

“KiA is one of the many cancerous growths that have infiltrated reddit,” David-Me wrote. “The internet. The world. I did this. Now I am undoing it. This abomination should have always been aborted.”

David-Me also accused Reddit leadership of allowing the subreddit’s hate to grow, citing a financial and corporate incentive, before the paragraph segues into a jumbled bit of anti-capitalist rhetoric. David-Me also compared KotakuInAction to the toxic r/The_Donald subreddit—which hosts memes and commentary on Trump-related media, calling it “viral cancer.”

David-Me evidently still had the power to lock down, not necessarily delete, the entirety of KotakuInAction. Reddit admins have since revived the forum, and numerous commenters have mocked David-Me and his self-described autism. Reddit admins have also stripped David-Me of his moderator privileges and have promised an investigation into his behavior.

Certain Reddit communities like The_Donald, KotakuInAction, and the now-defunct r/Incels have propagated dangerous rhetoric like hate speech and pedophilia. Reddit has banned a number of communities that it says goes against their guidelines, but the process by which subreddits are evaluated and punished is still largely ethereal, leaving many wondering if Reddit does, in fact, see a value in letting communities like KotakuInAction thrive.

The Daily Dot has reached out to Reddit for comment and will update this story as necessary.