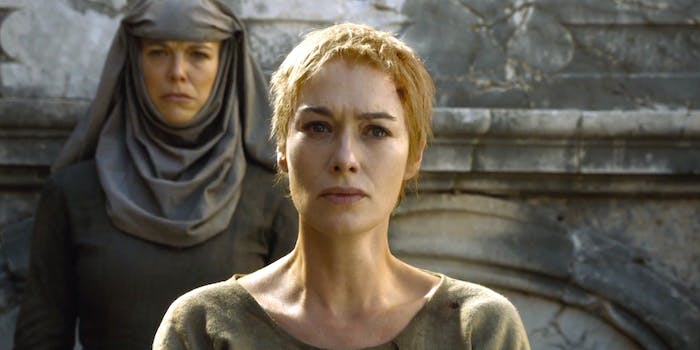 She defends Lena Headey's decision to use a body double.

This article contains sexually explicit material and spoilers for the Game of Thrones season finale.

The woman who helped Lena Headey make Cersei Lannister’s walk of shame so powerful is speaking out after viewers speculated how much of the scene was shot with a body double.

Cersei’s big moment in the “Mother’s Mercy” episode managed to make even some of Cersei’s biggest haters feel sympathy and anger on her behalf, but others were more focused on the nudity itself, leading some to zoom in and compare screenshots of Headey closeup and the character’s full frontal shots.

Headey opted to use a body double “for several reasons,” one which includes focusing on the complex emotions throughout her performance. Rebecca Van Cleave, the American actress who played Cersei’s body double for the six-minute sequence, defends Headey’s decision.

“I personally don’t agree with anybody who says having a body double detracts from the scene,” Van Cleave told Entertainment Weekly. “Lena put her heart and soul into that scene. It should all be about the finished product, not about whose body was where and whose head was where.”

Calling it “one of the scariest, most wonderful, most gratifying experiences I could have imagined,” Van Cleave was chosen out of more than 1,000 actresses who applied for the role, with the show flying her and six other finalists to meet with producers in Belfast, Northern Ireland. Although Van Cleave had been acting since age 5, it was the first time she had performed a nude scene.

During the three-day shoot in Dubrovnik, Croatia, Van Cleave and Headey worked together every step of the walk. Headey would give Van Cleave insight into Cersei’s mind for each scene so the steps could match the wave of emotions she portrayed while 500 extras shouted insults, threw things at her, and even exposed themselves to her.

“It was a long process trying to find somebody who got what it means physically to be there with all that stuff going on, and Rebecca is a great actress,” Heady said of Van Cleave. “It takes a lot to walk through the crowd naked for three days in a row with the crowd braying at you.”

Headey’s face and Van Cleave’s body were combined in post-production to bring us what we saw Sunday night. And body double or not, it’s still a powerful piece of television.