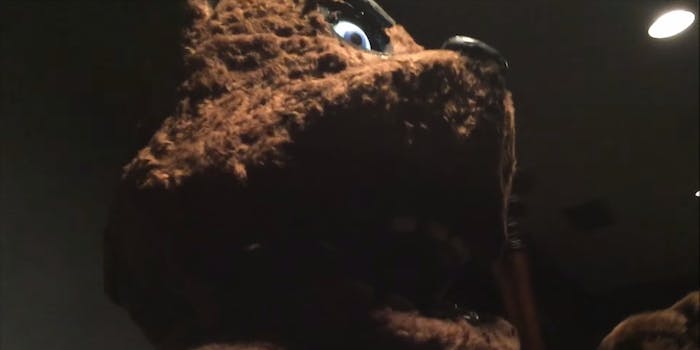 We aren't prepared for this level of nightmare fuel.

The single-person horror game Five Nights at Freddy’s was a runaway viral success last year. Now it’s fueling our nightmares in the real world, with a terrifying life-sized doll based on the titular “Freddy”—a homicidal children’s arcade mascot.

The giant animatronic replica of the game’s Freddy Fazbear waggles his terrifying eyebrows, speaks in a demonic voice about how awesome his pizza parlor is, and scares the camera into taking horrific vertical-video halfway through the recording.

Here’s another clip complete with dry ice for even more vertically filmed terror:

The creator of the doll, YouTube user Dr.CreepyPasta, is attempting to crowdfund the resources to make the other animals in Freddy‘s ensemble cast, including a real-life Bonnie the rabbit, Foxy, a fox who only emerges from his hideout when he’s ready to slice and dice, and Chica the enormous maniacal duck.

Currently, the campaign has only achieved a paltry $250 of its goal of $50,000, probably because absolutely no one thinks summoning these creatures to assemble IRL would be a good idea.

Correction: A previous version of this story incorrectly identified the YouTube user Dr.CreepyPasta.

H/T Daily What | Screengrab via MrCreepyPasta/YouTube