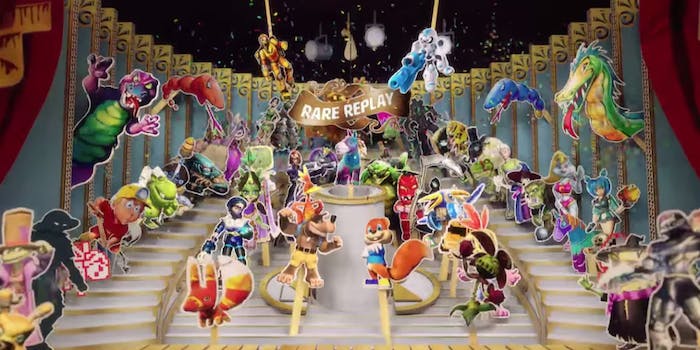 Rare is a goofy developer, and that’s why gamers love it.

A Broadway-style musical number released today celebrates some of best games ever produced by the famed British studio Rare Ltd.

In addition to being a catchy trip down memory lane, it’s reminding gamers about the impending Rare Replay, a compilation of 30 games developed by the studio to celebrate its 30th anniversary. Rare Replay will be released on Aug. 4 for the Xbox One.

First announced at Microsoft’s E3 2015 media briefing, Rare Replay is a massive nostalgia trip for gamers who remember the golden days of the Nintendo Entertainment System, though Rare’s popularity is by no means limited to a historical lens. Some of the most popular games for the Xbox 360 were developed by Rare.

“Rare Replay Opening Number” stars beloved characters from across the spectrum of video game consoles for which Rare has published games over the past three decades.

Rare has also released a behind-the-scenes video for the Rare Replay Opening Number, set to a goofy xylophone track for another bit of fun.

Developer Rare Ltd. rose to fame during the Nintendo Entertainment System era with games like R. C. Pro-Am, Battletoads, and Wizards & Warriors, all of which are guaranteed entries in “Best Of” lists for the NES. Rare was so successful on the NES that Nintendo purchased a large share of the studio, thus tying the two companies together. Donkey Kong Country, published for the Super Nintendo Entertainment System was another colossal hit for Rare.

Rare pushed its way into the fighting game world with Killer Instinct, released as a quarter-gobbling arcade cabinet in 1994, and further established its reputation as a studio that could be trusted to produce games of exceptionally high quality. Killer Instinct later saw console ports, the most recent of which was released in 2013 as one of the first games for the Xbox One.

Rare solidified its place in video game history with GoldenEye 007 for the Nintendo 64. GoldenEye 007 proved beyond a doubt that first-person shooters were not the exclusive province of PC gaming. If you found an N64 owner who didn’t have GoldenEye 007 in their game library, you were also probably good at finding Leprechauns and unicorns. Banjo-Kazooie also established Rare as a force to be reckoned with on the N64.

Microsoft bought Rare in 2002, making it one of Microsoft’s first party development studios. Viva Piñata and Kinect Sports were critical and commercial hits respectively for the Xbox 360. The multiplayer game Sea of Thieves, currently in development at Rare, will be an Xbox One and PC exclusive.