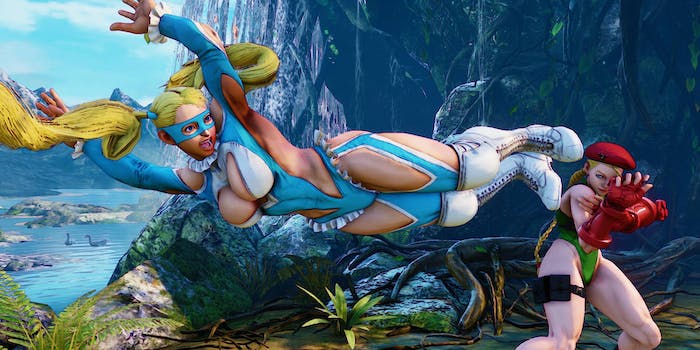 'We didn’t make any change because of external influences.'

With the imminent release of Street Fighter V, fans are foaming at the mouth. But some have started to notice head-turning changes being made as the game completes development.

Last month it came to light that character R. Mika, the scantily clad wrestler, had some of her animations altered. Most notably her butt slap as she entered a fight was removed. Some online cried censorship, blaming the increased focus on female representation in games and its influence on developers. But according to producer Yoshinori Ono, that’s not the case.

In an interview with Brazilian website UOL, translated by NeoGAF user Moraizen, Ono said the decisions were made internally.

“Our objective with ‘Street Fighter V’ is to start over from zero… we want the professional players and the casual fans of the series to return, but we also want to reach those who have never even touched a fighting game. So we can’t have something in the game that makes people think, ‘This is not acceptable.’”

“We didn’t make any change because of external influences… those changes came up internally. We decided to remove that because we want the biggest possible number of people to play, and we don’t want to have something in the game that might make someone uncomfortable.”

Ono clearly wants to make the game appeal to the widest audience possible.

“Probably we won’t be able to remove everything that could offend someone. But our goal is, at least, to reduce that number as much as possible so that they think ‘Ok, there is this issue here, but it is within the limits.’ We want that everyone can play and enjoy without worrying about anything else”

The video below shows the changes Capcom has made with R. Mika’s animations. You’ll notice that the camera pans higher, removing the butt slap from frame. But her critical art, what is essentially a flashy special move, with her tag-team partner Yoko Harmageddon is still there. Dual butt slam to the face and all.

This isn’t the first erogenous zone change Capcom has made for its female characters. During our preview of Street Fighter V at this year’s Tokyo Game Show, we mentioned that Chun-Li’s breasts jiggled uncontrollably. Capcom has claimed that it was a glitch that would be corrected upon the game’s final release. And it also seems that the camera angle for Cammy’s opening animation has been shifted upward.