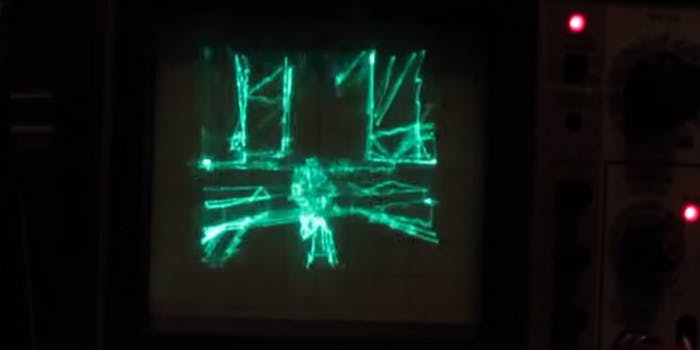 Some genius programmed ‘Quake’ on an old oscilloscope

No, seriously, someone made this work and it’s crazy.

You don’t need a new HD 4K television that costs thousands of dollars to play video games. Hell, you just need an oscilloscope that might run you less than a hundred bucks.

Pekka Väänänen, a programmer from Finland, has managed to run the first-person shooter Quake on a Hitachi V-422 model oscilloscope. There’s a poetry to this, in that the video game industry practically began on an oscilloscope with Tennis For Two, invented by Dr. William Higinbotham in 1958 at the Brookhaven National Laboratory.

You can get all the technical details of Väänänen’s experiment here. As far as we can follow, Väänänen used a combination of hand-coded software and existing tools to accomplish playing Quake, a game that defined a marked leap forward in FPS programming when it was released in 1996, on a device whose ilk first came into use over 50 years ago.

The best part of this experiment, which might look amazing to a layperson’s eye? Väänänen writes on his blog that he was disappointed by its performance.