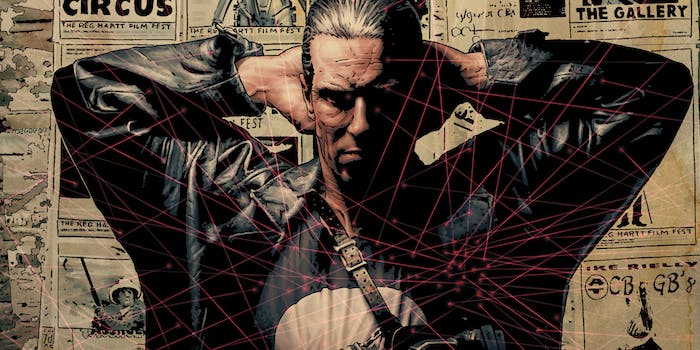 This ‘Punisher’ book illustrates everything great (and terrifying) about the character

This adult-rated volume collects two of the smartest and most shocking 'Punisher' stories from Marvel Comics.

We published extensive reading guides for Jessica Jones, Luke Cage, and The Defenders, but for Punisher, we have one simple recommendation. Read Punisher Max: The Complete Collection Vol 1. It collects two standalone stories from the definitive Punisher writer Garth Ennis, ignoring Marvel continuity.

Frank Castle’s backstory is simple to the point of cliché: a military veteran whose family was murdered by criminals, prompting him to become a vigilante. Although he sometimes fights alongside traditional heroes, his brutality stretches to outright villainhood. His first appearance (The Amazing Spider-Man #129 in 1974) introduced him as Spidey’s enemy, and the Netflix franchise cast him as a mass murderer.

Garth Ennis and artist Steven Dillon (Preacher) revived Punisher in 2000, kicking off a new era of adult-rated Punisher comics. Working with several artists over the next few years, Ennis reveled in gore, nihilistic storylines, and straightforwardly offensive content. I picked this volume because it cuts to the heart of Frank Castle’s role without presenting his violence as cool. Driven by an unforgiving moral code, his brand of vigilante justice arguably makes the world a more frightening place.

Born is the first of the two stories in this volume, taking place during Frank Castle’s military service in Vietnam.

Castle leads the last functioning platoon in a half-abandoned base. Most of the other soldiers have succumbed to heroin or apathy, counting the days until they fly home. Castle, meanwhile, is obsessively dedicated to killing as many Viet Cong as possible. He displays an almost supernatural efficiency in battle, described by another soldier as being “in love with war.” Unlike the petty sadism expressed by some of his men, Castle is merely satisfied with a job well done. That satisfaction is one of the few emotions he seems to experience at all.

Born deserves every warning under the sun. There’s a brief rape scene, and the dialogue is peppered with homophobic and racial slurs. Dozens of characters die in horrifying ways. But if you can stomach that, it’s a great introduction to the truth behind the Punisher’s origin story. It suggests that the Punisher wasn’t born out of grief and vengeance; he was always there, hiding behind Castle’s role as a dutiful soldier and husband. To borrow a phrase from Hannibal, Frank Castle is the Punisher’s “person suit.”

Weirdly, one of my favorite moments is the short scene where Castle reunites with his family. “Motivated by the death of his wife” is a sexist and overdone concept, and this foreshadowing almost feels like a parody. Artist Darick Robertson depicts Maria Castle with a blank, beauty queen smile, while the two children are silent cherubs. Beside them, Frank has transformed from blood-spattered berserker to Ken Doll smoothness in the space of two pages—a perfect hero returning from the war.

While Netflix (and some modern comics) updated the Punisher as a veteran of Afghanistan or Iraq, Ennis kept Castle’s Vietnam backstory for Punisher Max. In the mid-2000s setting of In The Beginning, artist Lewis Larosa draws him as a craggy, aging heavyweight.

In The Beginning illustrates why Frank Castle is such a dicey figure for contemporary adaptation. Slaughtering mobsters en masse at a mafia family party, he’s the ultimate lone wolf gunman. His black-and-white worldview turns everyone at the party into enemy combatants, sentenced to death without trial. Faced with that kind of merciless firepower, the villains feel more like victims.

A more dangerous adversary arrives in the form of Castle’s old partner Microchip, who wants to recruit him for a CIA mission. (By the way, don’t let the name fool you. Microchip is a rather corny hacker character in some comics, but Punisher Max revitalizes him with realism and pathos.) This leads Castle to confront his own transition from patriotic loyalist to independent vigilante, exploring his newfound distaste for the military-industrial complex.

Due to their adult-rated content, you won’t find either of these stories on Marvel Unlimited. They’re published together in Punisher Max: The Complete Collection, Vol 1 and in separate volumes for each miniseries. Neither has much to do with Netflix’s Punisher on a surface level, but they’re an excellent introduction to the character’s more mature themes.