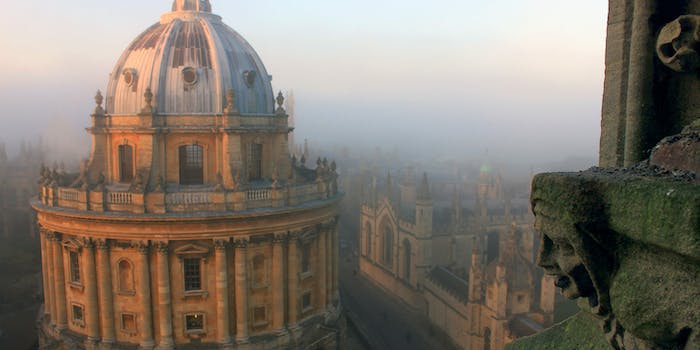 It’s been 17 long years since The Amber Spyglass was published, completing Philip Pullman‘s epic His Dark Materials trilogy. This autumn, a second trilogy will begin.

Pullman announced The Book of Dust shortly after The Amber Spyglass, but we didn’t get a release date until this year. The new story will be published in three volumes, focusing on His Dark Materials protagonist Lyra Belacqua for the first two books. The Guardian just published an extract from Volume 1, revealing the title to be La Belle Sauvage.

The scene introduces Malcolm Polstead, a young Oxford boy who will have a significant role in the new trilogy. He’s 11 years old during this extract, which takes place when Lyra is still a baby. Her father Lord Asriel is barred from visiting her in Oxford, and he enlists Malcolm’s help to sneak into the convent where Lyra lives.

This is the first we’ve read from Pullman in several years (he published a couple of short His Dark Materials stories between trilogies), and it has all the intrigue and atmosphere of his other novels.

The title is also ripe for speculation, because, as always, it contains several levels of meaning. “La Belle Sauvage” is the name of a boat in this scene, and Pullman says the boat plays an important role in the book “because some of the story is set during a massive flood.” But in a less literal sense, it could also refer to the beautiful yet menacing Marisa Coulter, Lyra’s mother. Finally, it could be a subtle literary and historical reference. Pullman is a font of knowledge, and he will certainly be familiar with the Bell Savage inn, a pub and playhouse with a thriving role in London’s history for 400 years, featured in numerous works of art including Charles Dickens’ Pickwick Papers.