At Star Wars Celebration, we saw one of the coolest toys ever made.

Still, it’s hard to feel cynical about marketing when you’re presented with a miniature flying Millennium Falcon with laser-battling capabilities.

There are plenty of Star Wars drones (and fan builds) already, but Propel‘s quadcopters stand out for a couple of reasons. First of all, the four debut models—X-Wings, Darth Vader’s TIE fighter, Empire speeder bikes, and the Millennium Falcon—are detailed enough to look like decorative replicas. Secondly, you can use them for actual battles, like airborne laser tag. 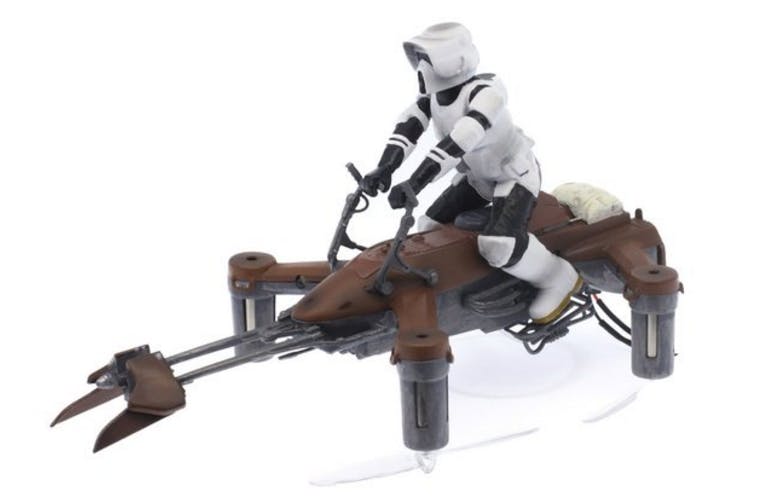 New RC Star Wars product from #propel-SW 4 products arrive in uk September £199-299 each Europe and North America come visit them in hall N8 at #starwarscelebration to see and demo the product.

Propel took up an entire hall at ExCel London Exhibition Centre this weekend, including a showroom and two huge demonstration areas, each designed to look like a scene from the original Star Wars trilogy. One resembled a zoo enclosure, a lush green habitat that we quickly realized was the forest moon of Endor—miniature scout troopers were zipping around on speeder bikes.

The other area was even more impressive, recreating the Death Star dogfight from Episode IV. With the Death Star positioned at one end of the hall, X-Wings, TIE fighters, and the Millennium Falcon battled to a soundtrack of Star Wars music. The rotors are unavoidably noisy, but they’re almost invisible during flight, giving the copters an appealingly realistic look.

There were strictly hands-off displays, but fans were cheerfully lining up just to watch Propel’s crew of drone pilots at work. And while amateurs will probably find it harder to recreate all the flips and tricks we saw during the Death Star battle, the quadcopter controls seemed simple.

Each copter has three speed settings up to 40 mph, and can turn 360 degrees in midair. However, the main appeal is obviously the dogfight option, where people can shoot each other’s copters with lasers. Each time you land a direct hit, your controller vibrates with haptic feedback. After three hits, the enemy copter will “die” by powering down and sinking to the floor. 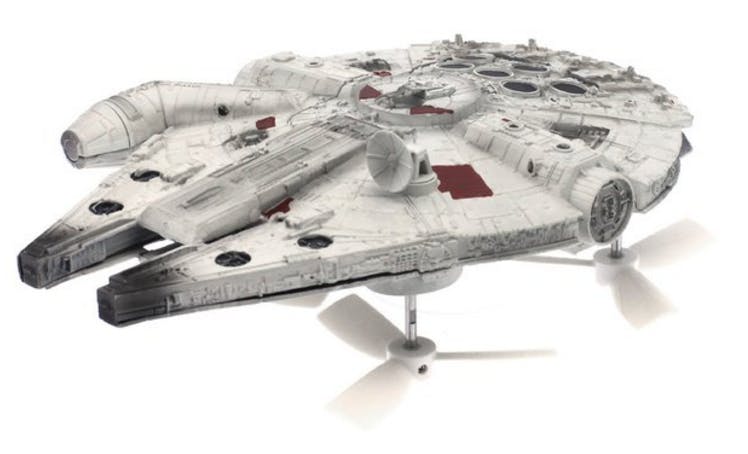 The copters are retailing at £300 ($397) for the Falcon and £250 ($331) for the other three, with a display case that plays Star Wars clips when opened. The bad news is that the first 15,000 were limited to Star Wars Celebration preorders, and Propel hasn’t confirmed U.S. sales yet. We’re already anticipating a transatlantic black market for these things—which is fitting for the Millennium Falcon, at least.

SEE ALSO: I watched every ‘Star Wars’ movie in one sitting