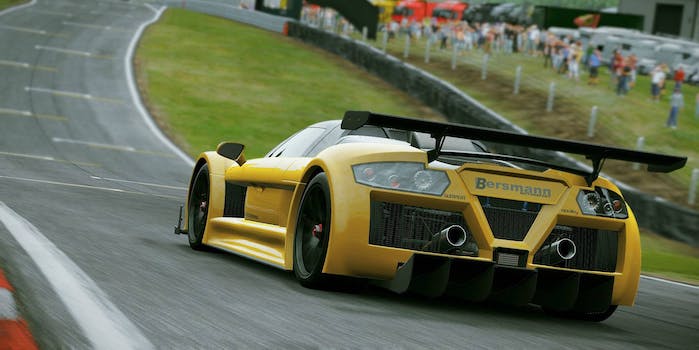 There hasn’t been a simulation racing game quite as hyped in recent memory as Project CARS. Developed by Slightly Mad Studios, the team behind the critically loved Need for Speed: Shift and Shift 2: Unleashed, it’s geared to create a dedicated community for the most realized sim racing experience yet.

The “CARS” in Project CARS stands for Community Assisted Racing Simulator. This game was community funded, meaning that dedicated individuals could actually contribute to the game’s development with purchased tool packs. It also means that those who have invested their own time and money into the game will receive a cut of the profits for the first three years the game is out on the market. Not only that, the studio received consultation from Top Gear’s former Stig and former Fifth Gear presenter, Ben Collins.

There’s clearly a reason why this game has been so anticipated.

Project CARS can seem barren in comparison to other big racing games like Forza 5. The menus are rather plain, without much fanfare or cool wooshy effects. What is cool: You can start with any career path you would like. While other racing games have a progression, wanting you to start with slower cars and slowly unlock the really fast, expensive ones, Project CARS doesn’t put up with any of that. You can choose to start with kart racing all the way to formula series right from the get-go. 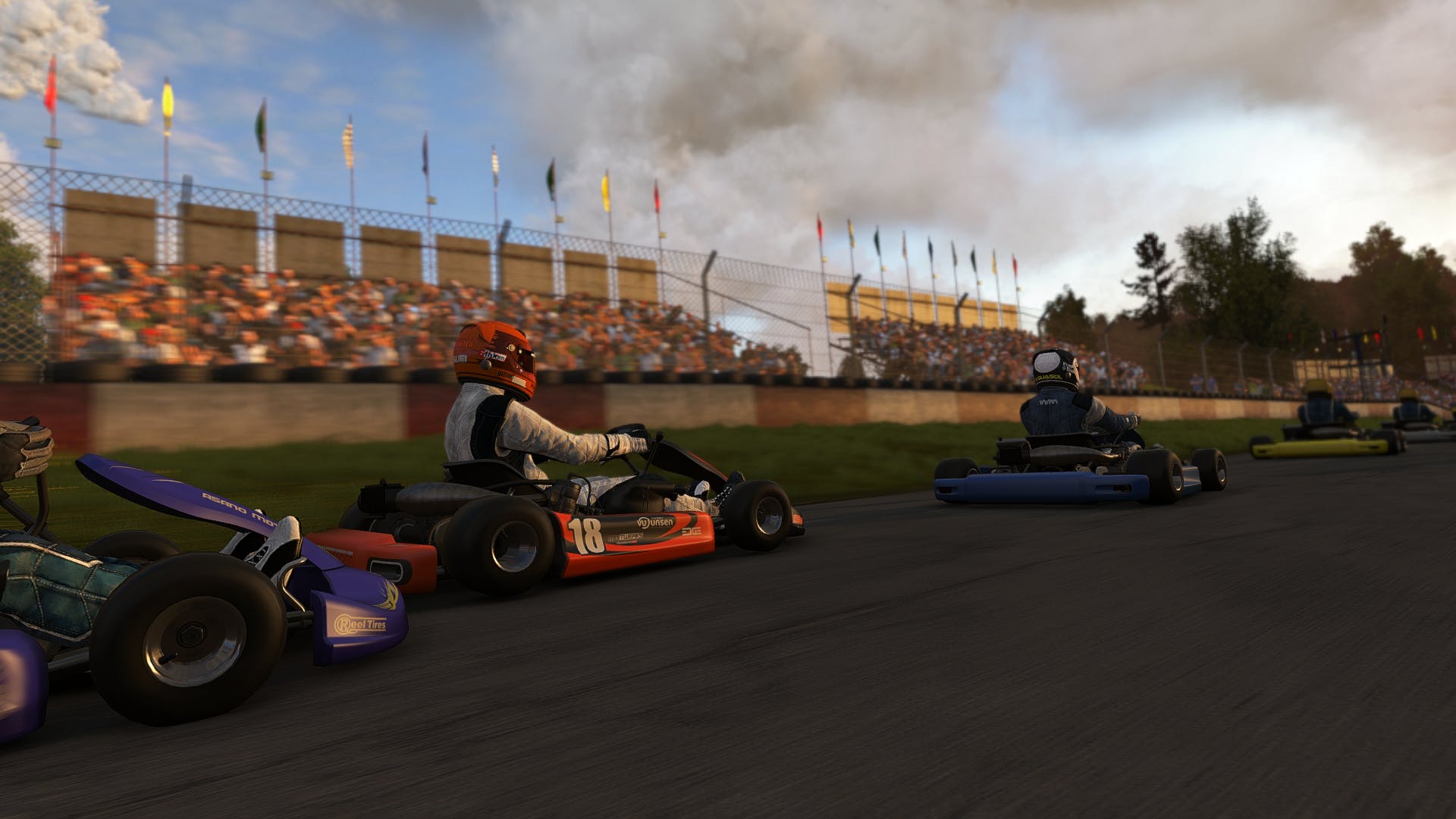 And that’s what’s kind of awesome about Project CARS. It doesn’t feel like a game, but a program made to simulate racing. There’s even an X icon at the top right corner of the screen to exit the game. It’s very un-game like. In many ways, this can also be a problem. Gamers who are used to more traditional menus and systems may be put off by the plainness of the game. It can seem daunting for newcomers without the game holding their hands.

Project CARS does not have an easy difficulty curve. This is a sim-racing game for sim-racing enthusiasts. Although games like Forza 5 and Gran Turismo are sim racers, they were made with beginners in mind. Those games will have added assists to make the game easier to play. In Project CARS, you have to be aware of things like traction, entry speed, tire warmth, brake heat, weather, and even the amount of remaining fuel in your car. It also takes some intuition to understand when to downshift and enter a corner at the proper gear to exit it without spinning. For experienced sim-racing fans, it shouldn’t be too much of a problem, but newcomers will most likely have to consult guides and tutorial videos online.

Hopefully it doesn’t dissuade newcomers, because the game’s mechanics are on point. It could even be argued that it’s some of the most realistic racing to be found on the market. Once players get a handle on how the game works and how a particular car drives, it becomes pretty hard to put down. Many racing games suffer from the issue of having all of their cars feel too similar. In Project CARS, each vehicle feels unique and will take some time to learn. It also gives you a better appreciation for the super expensive hypercars. The McLaren P1, with its hybrid technology and 986 brake horsepower, is not a car that should be trifled with.  After playing Project CARS, I now understand why some overzealous owners have crashed their $1.3 million purchases.

I played Project CARS with an Xbox One controller on a gaming PC. Once you find your right control scheme, the game is pretty responsive. There are a ton of options for choosing racing wheels, pedal sets, and gear shifters. But playing with an Xbox One controller can get you by just fine. Although, if you have a friend with some racing hardware, it’s probably worth borrowing.

Graphically the game is absolutely astounding. We played this game on a gaming PC fitted with a MSI 780 Lightning graphics card. Slightly Mad Studios claims that the game supports up to a 12k resolution. That means you can set up three 4k monitors to have an insanely detailed racing experience. Sadly, I don’t have that setup, but the game was still plenty beautiful on a 60-inch 1080p television. Weather effects were on point, as rain and fog presented their appropriate challenges. The game was prettiest after some intense rain, when the sun would shine in a pristine orange glow, capping off a race with beautiful scenery. 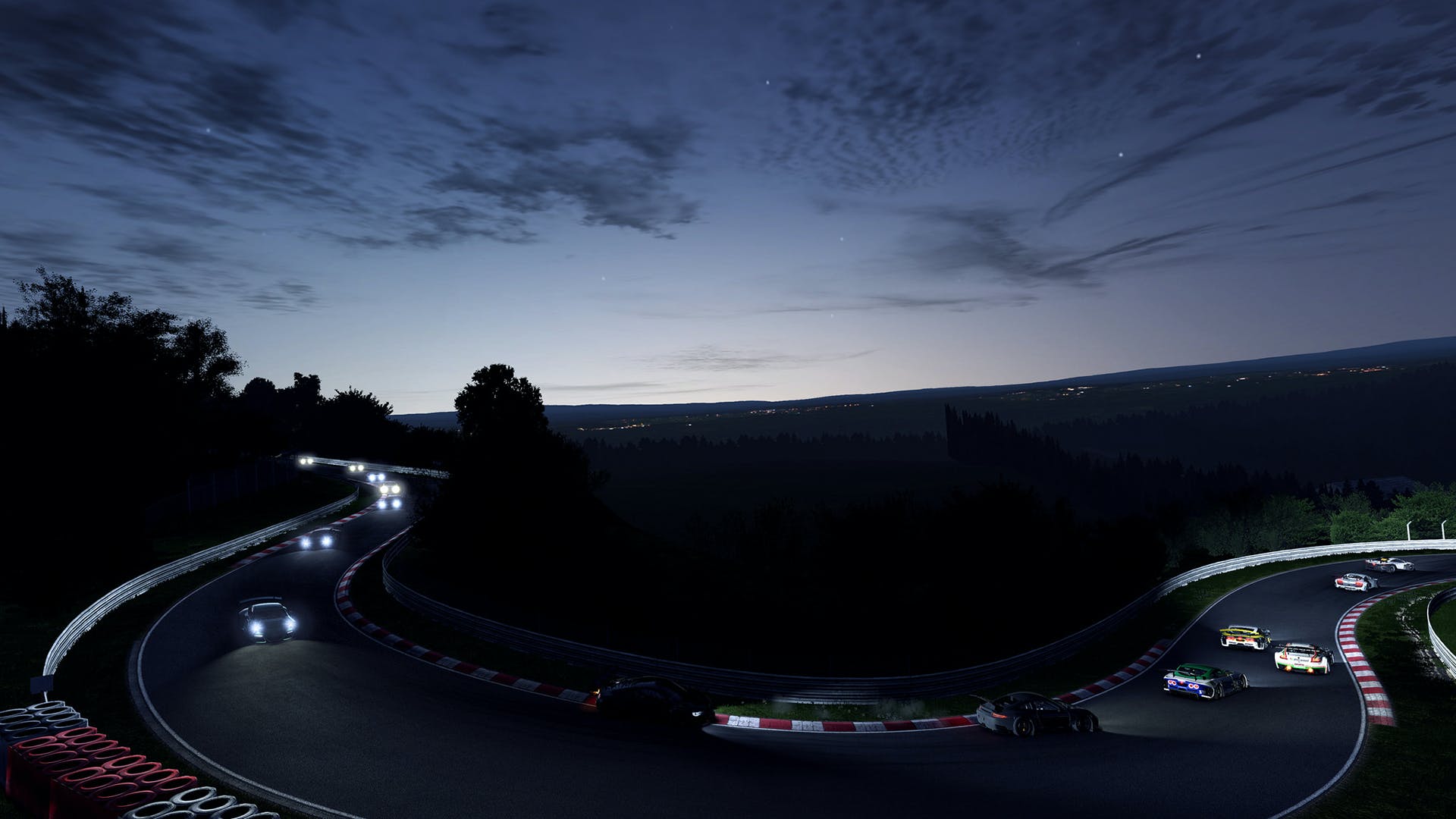 And of course cars have been digitally recreated in stunning detail. It’s remarkable to see how sunlight caresses each car you drive. Locking framerate to 60 frames also creates that much more of an engrossing experience. And the sound. Oh god, the sound. Listening to the engine of an Aston Martin V8 Vantage bellow is absolutely intoxicating. It’s quite easily some of the best sound design I’ve ever experienced in a racing game. You can even hear when a pebble bounces off the underbody of your car.

As great as the mechanics, graphics, and sound are, the car selection is rather lacking. The game, with DLC, includes 74 cars. It’s a far cry from the 218 cars that can be found in Forza 5. This means that a lot of our favorite cars like the 2005 Ford GT or the 2009 Honda S2000 CR are missing. The number of exclusions is baffling. We understand that Ferrari was unwilling to license its cars because the game included realistic damage. We don’t understand how publisher Bandai Namco or Slightly Mad Studios were unable to get rights to Subaru or Toyota vehicles.

At least the track selection is great. It includes some classics like Road America and the Nürburgring, while also including some lesser-known tracks, like Donington Park. Tracks have also been recreated with surprising accuracy. Cars react to little bumps and creases along the track pretty accurately.

The game isn’t without its odd hiccups. It doesn’t have the best controller integration, meaning that you will need to have a mouse and keyboard handy. There were odd glitches triggered by wireless headphones, meaning I had to confine myself to less-than-stellar television speakers. There were instances in which my controller would just lose connection, which is rather annoying at the end of a five lap race.

The folks over at Slightly Mad Studios should be proud of what they have accomplished. Project CARS may not quite live up to the hype, but considering it has outdone its competition in some critical areas, it should be applauded. It may not be a perfect sim racer, but it’s pretty damn near close, and for those willing to put in the time, can be incredibly rewarding.