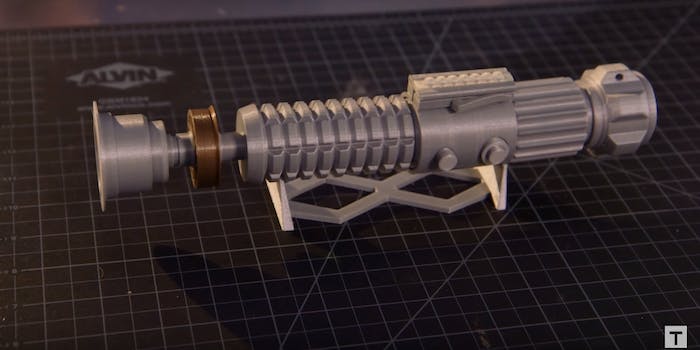 You can 3D print this replica Obi-Wan Kenobi lightsaber

You can now 3D print your own true-to-life lightsaber, assuming you have a 3D printer on hand. The folks at 3D printing company, Ultimaker, came up with a complex design for a light saber. Designer Jacky Wan came up with the print for May the Fourth be With You Day in 2014. But, as the new Star Wars: The Force Awakens movie release draws near, it deserves another look.

Tested, the maker-focused YouTube channel of Mythbusters Adam Savage and Jamie Hyneman, brought Wan on the show to talk shop about his Obi-Wan Kenobi lightsaber replica.

Wan expands on a lot of the technical details of his 14-piece design in a blog post at Ultimaker’s website.

Basically, by creating the lightsaber in 14 parts instead of four, as Wan originally designed, you can avoid a lot of the hiccups and artifacts from the 3D-printing process and come out with a much nicer, more polished product.

And while it might seem rather laborious to print 14 pieces, Wan says there’s another benefit.

“If you plan to paint the model, it is far less time consuming to paint parts already separated by their material so there’s no need for masking tape,” Wan writes in his blog post. “The result is a much more efficient workflow and a more professional finish.”

Wan also has a whole tutorial on how to paint the replica to give it that nice, well-worn look of a piece of technology from a long time ago.