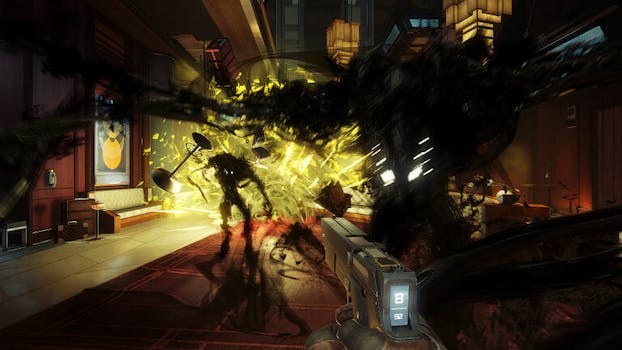 Review: Prey is an excellent, atmospheric shooter that’ll get under your skin

Talos 1 has many stories to tell. The derelict space station serves as the backdrop for Arkane Studios’ latest adventure, Prey, and houses a surprisingly complex narrative about our collective fascination for science and technology. Through moments of emergent storytelling and environmental clues, Prey slowly reveals the introspective nature of its core concept, elevating the already excellent gameplay to a weighty science-fiction experience worthy of its predecessors.

Prey’s influences are easy to identify, from the branching skill trees of Deus Ex to the tailored power-ups of Bioshock. But Arkane Studios mix those classic design elements with the open-ended freedom of the Dishonored series to deliver a systems-based shooter that affords the player every opportunity to choose their own way forward. As Morgan Yu, players get to choose nearly every aspect of their character, including gender. The story begins with a simple amnesiac trope to prop up early moments, but quickly becomes a mind-bending loop of stuttering simulations and alien invasion.

Though the first few hours are a gradual build from tense encounters with tricky enemies, Prey grows stronger and stronger the deeper you journey into Talos I, learning more about the people who lived there and the threat haunting its halls.

The first of the aliens you encounter are called Mimics: tiny, skittering spider-like beasts with the ability to take the shape of inanimate objects. When they are thrown into the mix of exploring the abandoned areas, every room you enter is a potential trap. Two coffee cups by a computer in a private office either tell that the owner had a guest with them when they departed, or that a violent outburst is moments away. This is the genius of Prey, keeping players on their toes for story clues in the world itself while never sacrificing the tension of an Alien-influenced thriller.

In early segments, players aren’t given anything to defend themselves with save for a handy wrench. The next tool added to the arsenal is called a GLOO Cannon, which breaks with the conventions of any traditional FPS. This weapon shoots a sticky glue that can immobilize foes, patch holes, and make paths through the world. Prey is confident enough to introduce this gun within the first few hours, essentially handing control of the verticality in any arena to the player’s whimsy. With it, you can build upward, outward, and over to any location, provided you have enough ammunition.

Action-heavy corridors and cover-based shootouts come in due time, but most of the adventure has you exploring an expansive level of the spacecraft for clues about its passengers and your history. The plot strings Morgan Yu along a crumb trail of “fix this” and “fetch that” with plenty of expository monologues and ominous musings from disembodied voices, but the recordings and emails you can discover carry the real weight of the narrative. Nearly everything in Prey is intricately tied together, and nothing feels superfluous. Each crew member has a name, schedule, and cabin you can find, weapons and ammo are given a reason to be where they are, and the alien’s supernatural powers are grounded in concrete mechanics.

Better yet, Morgan has the ability to scan and learn practically everything the Typhon can do. Players are able to mess around with the Mimic power as well, and it proves to be delightfully entertaining, if mostly useless in combat. Most of the over-powered enemies can be bested by their own weapons, and luckily, players can wield the same augmentations, or craft grenades that get the job done.

However you want to make your way through Prey, you can, for the most part. Too many areas are cut off by keycards or passcodes, and backtracking can be a nuisance for how essential it is. Just because you’ve cleared a room of enemies or opened the hidden safe doesn’t mean you won’t be back, or that there aren’t more secrets to uncover.

Talos I is a smartly designed setting, with connecting corridors and shortcuts around almost every corner. Even dying in combat offers the opportunity to go back and find a new strategy, and you will die quite often. Too many of the enemies can crush Morgan in one hit, or gang up to the same effect. Likewise, it’s easy to get yourself stuck behind a checkpoint with minimal health and no supplies. Quick saves will be one of your most valuable tools, even if the game doesn’t tell you so.

Prey’s biggest weakness is that it often doesn’t play by its own rules, and is too quick to punish the player for trying something new. Enemies from off-screen will kill you in one second, removing the chance to learn what you did wrong. And for all the emphasis on resource management, it’s easy to cheat the system or even leave yourself accidentally under-prepared.

Still, despite a few missteps, Prey does a lot of smart, rewarding innovation with its gameplay. Your abilities are balanced with those of the enemy, and the progression system ensures that you’ll never become a one-man death machine. That palpable tension of a shadow lurking just out of sight remains taut for the entire campaign, and each encounter layers on more reasons to be fearful while poking around Talos I. Learning about the humans that may or may not have survived is just as worthwhile as investigating the alien presence, and the mystery comes to a startling, sudden conclusion that will change how you view certain events on subsequent playthroughs.

Prey is available now for PC, PlayStation 4, and Xbox One.

Disclosure: This game was reviewed on PlayStation 4 with a code provided by the publisher.