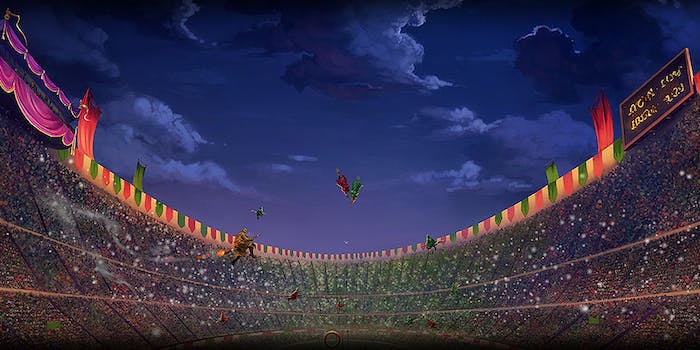 Fans of Quidditch Through the Ages, J.K. Rowling‘s cheeky but fact-filled addendum to her Harry Potter series, have a new surprise waiting for them at Pottermore, Rowling’s interactive post-Potter website where she reveals new tidbits and information about the wizarding world.

Potter fans and Quidditch players who log in to the site today will find the first of a two-part series on the sport and the history of the Quidditch World Cup—provided they can remember their login information, of course.

Pottermore has been criticized since its delayed launch for having a considerable barrier to entry—all Potter fans must take a Sorting Hat quiz to be sorted into their proper Hogwarts house before getting a username. It’s also been criticized for taking too long to update information related to the series’ seven books. Although it launched in 2012, its chapter-by-chapter interactive route through the books is only about halfway through Book 4. Fans have complained of having to progress through each chapter to get to their favorite parts, and then there’s the months of waiting for new chapters to appear.

But, this being Harry Potter, many trudged on through. As visitors progress through the site, they can find rewards, accrue house points, and enjoy lovingly detailed artwork and graphic design that goes into every chapter. If you’re not into interactive roleplaying and just want to read new info about the books, though, the structure can be frustrating.

As a result, Pottermore hasn’t quite become the thriving community that fans and Rowling may have once envisioned. So it’s nice to see new information turning up to bring its 7 million users back to the site.

The new Quidditch history shows up alongside Chapter 7 of Book 4, corresponding to Harry’s trip to the Quidditch World Cup. It was released in conjunction with Rowling’s support of Scotland’s rugby team. In a press release from Pottermore, the fantasy is alive and well:

J.K. Rowling is a world authority on Quidditch and has been writing about the sport since 1990. Royston Idlewild, former player and International Director of the ICWQC, described her as ‘perhaps the only person in the world who knows more about Quidditch than I do.’

So what new info can you find about Quidditch? The parallel with the Olympics is alive and well: the tournament occurs every 4 years, and is described in the new passage from Rowling as “simultaneously the most exhilarating sporting event on earth and a logistical nightmare for the host nation.” She also inserts a parody of the rowdy and annoying noisemaker well-known to soccer fans, the vuvuzela. Rowling’s version is called a “Dissimulator,” and emits “loud cries of support and puffs of smoke in national colors.”

We also learn a few important new World Cup rules, mainly, “[N]o dragon is to be introduced into the stadium for any purpose including, but not limited to, team mascot, coach or cup warmer.”

And there are moments of infamous tournaments throughout the ages that will delight eager wizards and sports fans of all ages (“What had been a Quidditch match turned swiftly into a human versus tree battle”).

Part two of the series will appear on the website next Friday, March 21.

Other recent turns in the Pottermore narrative have angered and upset some fans for erasing or “hijacking” the queer narrative many fans have had of both Remus Lupin and Nymphadora Tonks.

So it’s nice to see a new bit of Wizarding history we can all agree on: one that reminds us that battling violent spruce trees is never a good idea, and that Quidditch, just like Harry Potter, is awesome through the ages.