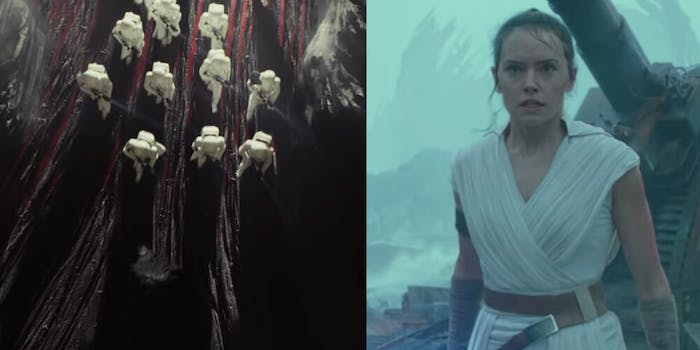 Does ‘Rise of Skywalker’ have the same political troll problem as ‘The Last Jedi’?

In 2017, a researcher from the University of California began analyzing tweets following the release of Star Wars: The Last Jedi, which was receiving online backlash at the time.

After collecting and examining tweets for seven months, the researcher, Morten Bay, published his findings in a 2018 paper, titled “Weaponizing the haters: The Last Jedi and the strategic politicization of pop culture through social media manipulation.”

The paper detailed Morten’s analysis based on original tweets from a total of 967 accounts. Of those accounts, 206 spread negative comments about the film. And of those 206, roughly 105 cited political and social issues in their criticisms.

The study resulted in a political firestorm at the time after countless media outlets incorrectly reported that Russia bots were behind much of the criticism, although Morten corrected the record to note that only 16 accounts of the 967 were suspected Russian bots.

Morten’s overall message was that society’s political debates are becoming increasingly prevalent in the pop-culture realm.

This begs the question. Has Disney’s recent release of Star Wars: The Rise of Skywalker experienced the same kind of political upheaval? Are right-wing trolls using the film to advance their political viewpoints?

For starters, the two films and the public’s reactions to them are notably different. While The Last Jedi received a 91% on Rotten Tomatoes from film critics, the audience score was an abysmal 43%.

The two films also appear to show that critics and fans often rely on different metrics when determining whether installments in the iconic franchise deserve praise.

Speaking with the Daily Dot, Morten, who authored last year’s paper, stated that although he hasn’t carried out the same in-depth analysis on Twitter commentary over the latest film, what he has seen suggests that Rise of Skywalker has not produced the same kind of political vitriol.

The arguments this time around appear to center on differences between J.J. Abrams, who directed Rise of Skywalker, and Rian Johnson, who was behind Last Jedi.

“If there isn’t a political rift to be exploited, the trolls don’t show up,” Morten said.

Despite the divisiveness created by the films, Disney isn’t incapable of making Star Wars content beloved by both critics and fans alike.

The first season of Disney+ series The Mandalorian, for example, has thus far received a 94% from critics on Rotten Tomatoes and a 93% from viewers.

Don’t expect things to die down just yet, though. As Star Wars continues to diversify and embrace modern themes, the franchise will undoubtedly once again find itself at the center of the culture war.