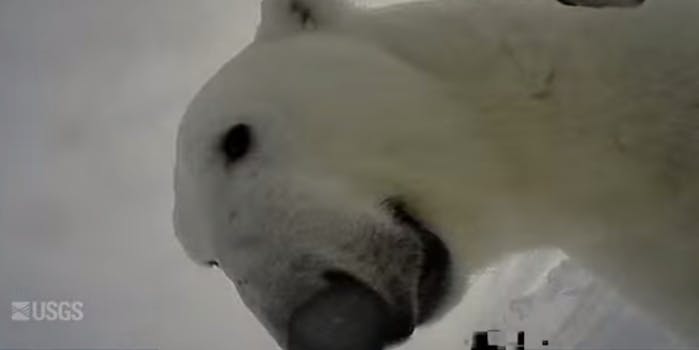 Scientists captured incredible footage while studying how polar bears live in the wild.

In the sub-zero temperatures of the Arctic, how does a polar bear chow down on a seal if the carcass the bear was saving on ice is frozen solid?

A collar-mounted video camera on a wild polar bear reveals the answer: Throw the seal-popsicle into the sea and wait for it to soften a bit.

The U.S. Geological survey released a video showcasing the best clips from four camera-carrying female polar bears that roam the sea ice north of Prudhoe Bay in Alaska. The video shows the bears swimming, an interaction with a potential mate, hunting, and figuring out how to eat a frozen seal.

The video collars captured just 8-10 days of the polar bears’ lives during April. But even that snapshot gives researchers insight into how these top predators move about their sea-ice habitat, which is threatened by a changing climate.

Polar bears are difficult to study. They range over thousands of miles and are notoriously fierce. Putting a collar on a wild bear is dangerous. But it’s the only way to get information on the creature’s habits during the harsh winter, when the Arctic Circle is plunged into 24-hour darkness and subjected to temperatures that can reach -50 degrees Fahrenheit.

The windy, dynamic zone where ice meets sea is the polar bear’s favorite hunting ground. There, ice floes are constantly melting and reforming, creating a changing landscape of open water channels and ice patches. Seals pop up between the ice to breath and polar bears nab them.

Lead researcher Anthony Pagano, a USGS biologist and Ph.D. student at the University of California, Santa Cruz, will use the data from the collars to track how the top predators expend energy and behave. He tested the video collars on a female bear named Tasul at the Oregon Zoo. (Incidentally, only female bears can wear the collars. A male polar bear’s neck is just as wide as his head and collars slip off. Leave it to some svelte lady bears to help science!)

The view from around a polar bear’s neck can be a little chaotic. To decode some of that, the collars also have an accelerometer—the same tech your smartphone uses to know which way it’s facing or whether you are shaking it. The collar’s accelerometer sends data back to Pagano and the team. This helps them know whether the bear is rolling in the snow, sleeping or hunting. The collars for the wild bears have a quick-release mechanism so the collar falls off when the scientists get the data they want.

The data will help researchers figure out how much energy polar bears use to swim, hunt, and survive in different seasons. On his research page, Pagano also writes that he plans to examine how melting sea ice will affect the future of these bears.

Other than being a cool view through the eyes of the Arctic’s top predator, the video may be some of the last footage we get of polar bears living in the wild. Already, declining sea ice has affected polar bears’ ability to reproduce and survive.