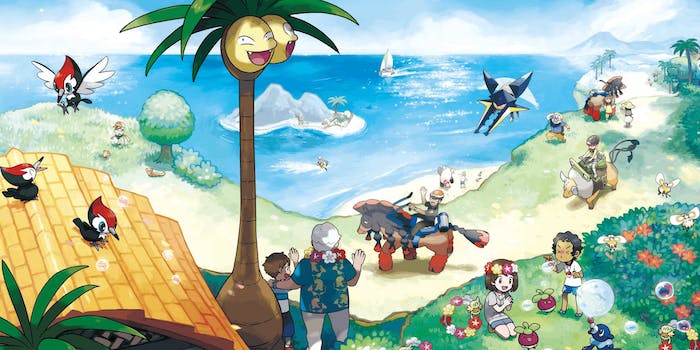 For 20 years, the Pokémon formula has remained familiar and friendly: assemble a team of your favorite monsters, collect eight gym badges, and become champion of the Pokémon League. The new Pokémon Sun and Moon, however, mark the most radical reinvention of the beloved franchise since 1996. 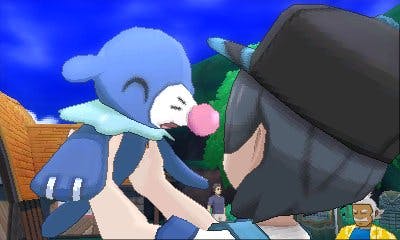 Immediately upon entering the Alola region, longtime fans are greeted with a bold new take on the familiar formula. Rather than a slow introduction to the new landscape, a pounding drum rhythm and tribal chants score cinematic scenes that establish many of the mysteries in Sun and Moon’s narrative. 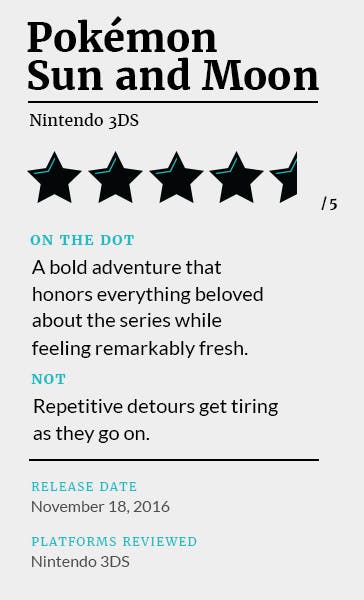 The people of Alola are deeply in touch with the natural side of trainers’ relationships with their Pokémon, and they emphasize the harmony of coexisting in the tropical paradise. The player character has recently moved to the islands of Alola and quickly embarks on the Island Challenge, a rite of passage that trainers use to grow with their teams. This means that for the first time, you won’t spend your adventure tracking down gym badges. Instead, you’ll complete in a gauntlet of challenges as you move from island to island.

Sun and Moon’s variation on gym battles comes in the form of trials tasking the player with a number of objectives ranging from memory puzzles to collecting items hidden away in dense jungles. However, battles are still a key part of the Pokémon experience, with strong Kahunas testing trainers on each island and Totem Pokémon functioning as superbosses. These overpowered enemies pose a serious threat and can call in help from wild allies, making for asymmetrical battles that challenge you to think strategically. 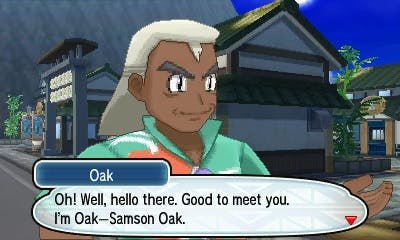 Where X and Y were an expansion of Pokémon‘s roots into a 3D environment with a beautifully realized visual presentation, these entries celebrate that legacy with a refinement of the core gameplay mechanics, making for a wholly original journey.

More than any Pokémon game before, Pokémon Sun and Moon feel like a real adventure. The environments of the Alola region are cleverly designed and full of secrets that encourage multiple visits, while each new route astounds with the diverse variety of Pokémon. The Pokédex makes use of nearly every creature from past installments, so catching them all will require serious effort. Of course, the new additions are excellent as well, though the final number of fresh faces may disappoint some die-hard collectors. Still, the new species feature unique type combinations and make use of special moves and abilities that will shake up competitive battles.

Z-Moves serve to add another layer to strategy, offering a once-per-encounter ultimate move that harnesses the full potential of your Pokémon. There are Z-Crystals for each Pokémon type to be found, and your opponents can also make use of this power. Another change to the battling system comes in the Battle Royal, a separate mode that pits four players against each other in a lopsided brawl. While this may be a fun multiplayer mode, it’s an annoying diversion to the main single-player game. 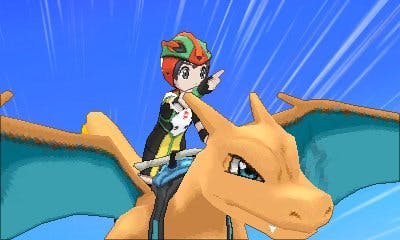 Outside of traditional Pokémon combat, though, Sun and Moon offer plenty of activities to keep you busy. To help fill your Pokédex, various NPCs will task you with capturing certain species and offer rewards in the form of cash, new moves, or special items. A special minigame called the Poké-Pelago lets you grow beans to earn the affection of your team, and an easily accessible multiplayer lobby called the Festival Plaza encourages connection with other players. You can also fully customize your trainer’s outfit this time around, adding another layer of personalization.

Pokémon Refresh, a beefed up version of Pokémon-Amie from the previous installment lets you feed and clean your Pokémon, as well as heal them of any afflicting status conditions. The Alola region offers even more ways to interact with your favorite Pokémon, including riding several creatures in place of previously required moves like Surf and Strength. Not only do these excursions provide the thrill of being able to freely roam on a Pokémon, but they make it easier to plan your team’s movesets, now that you won’t need to save space for HMs (formerly used to teach Pokémon moves). 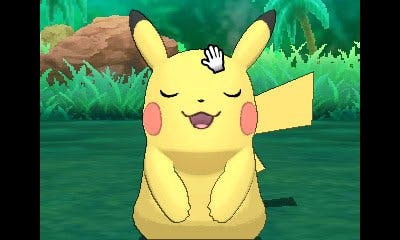 Poké-Ride and Pokémon Refresh contribute to the sense of connection between trainer and Pokémon that Sun and Moon emphasize, which plays directly into the central plot. The narrative introduces intriguing twists right from the very beginning, and the unfolding connections between Team Skull, the Aether Foundation, and mysterious Ultra Beasts take the story in unexpected, dark directions. Thankfully, Alola’s characters are entertaining and memorable, and the player character is given more agency than ever before, feeling like an involved member of the conflict instead of a witness to it.

Traversing the Alola region is a delight as well, thanks to many new mechanics that serve to ease your actions. The bottom screen now displays a small section of the world map by default, with your objective highlighted. While in battle, you can check an individual Pokémon’s stat changes and the effectiveness of any move, provided you’ve encountered the enemy before. 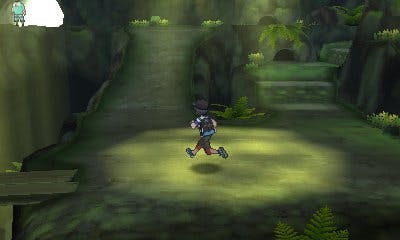 Overall, Pokémon Sun and Moon are best Pokémon games released yet for the 3DS. While the framerate still takes a dip whenever there’s multiple Pokémon in battle, the engine suits the swaying trees and sunny beaches of the Alola region wonderfully. The music, characters, and story are some of the strongest in Pokémon history and the core gameplay is irresistibly rewarding.

As the latest entries in a series that has been accused of growing tired, Sun and Moon comprise a complete Pokémon package that welcomes change but still provides the same thrills fans have come to love.

Disclosure: Nintendo 3DS copies of Pokémon Sun and Moon were provided by Nintendo for review.