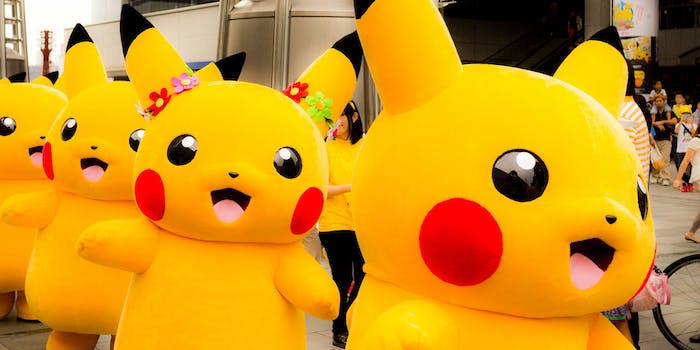 Nintendo and Twitch are going big for Pokémon’s 20th anniversary

Are you ready for this 32-hour livestream?

Feb. 27 is a momentous day for Pokémon fans, as it commemorates the 20th anniversary of the release of the first game on Game Boy. To celebrate, Twitch will be hosting a 32-hour livestream showcasing the entire Pokémon universe, from Kanto to Kalos.

The official Pokémon Twitch channel will air live coverage, game streams, and interviews about the series starting at 10am PT. At 6pm, the stream will switch to a 24-hour marathon of episodes of the anime and feature films.

If you want to get more out of your Pokémon Day experience, Nintendo has also partnered with retailers to give fans something to remember.

GameStop will also be handing out a Pokémon poster with the purchase of any Pokémon product. An exclusive Mew plush will also be available to purchase. At specific GameStop locations, Nintendo will also host a Pokken Tournament Early Access Invitational.

Pokken Tournament is a new fighting game similar to Tekken. Two winners from each GameStop location will compete in the finals at the Nintendo Store in New York City. The finals will take place on March 17, the day before the game’s release. There will be two age brackets, under 16 and over 16. The winner of each will be trained by a professional fighting-games player and will move on to the National Championships, which take place in Columbus, Ohio, from July 1-3. The winner from Ohio will then move on to the World Championships in San Francisco, which take place later this year.

For those less competitively inclined, Toys R Us stores will offer a foil card featuring Pikachu and Magikarp, an activity book, and a poster featuring the original 151 Pokémon.

New York City, fans can head to the Nintendo Store at Rockefeller Center for a day of fun activities.

Nintendo will also be re-releasing Pokémon Red, Blue, and Yellow on the Nintendo 3DS virtual console, along with a special edition New Nintendo 3DS with Charizard and Blastoise cover plates and a digital copy of Red and Blue.