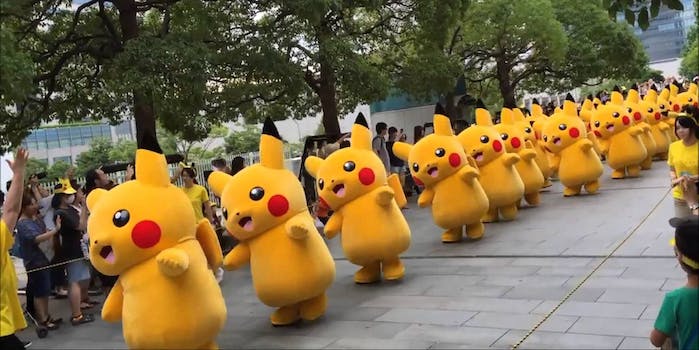 Go's vast success is all the proof Hollywood needed.

The Pokémon franchise already includes 19 animated movies, but only a couple of them got a theatrical release in the U.S. Despite the persistent popularity of Pokémon games—not to mention the ’90s nostalgia value of the franchise—no studios were convinced to invest blockbuster money in a fresh adaptation. Until now.

Deadline reports that Legendary Pictures is close to securing a Pokémon deal, following the studio’s mixed success with Warcraft. Rumor has it that Max Landis (Chronicle) has already developed a screenplay, although that should be taken with a pinch of salt. Landis is unusually open about his work on projects that never come to fruition, including writing drafts for a Power Rangers movie and Ghostbusters III, both of which were dropped and replaced by other creative teams.

Given the overwhelming success of Pokémon Go, a movie franchise now seems inevitable. After all, if someone can make an entire trilogy of films about Tetris, then a narrative game like Pokémon should be ripe for further adaptations.

The main question now is what form it will take. Realistic fantasy? A Space Jam-esque combination of live actors and cute, cartoonish pokémon? And will filmmakers feel obliged to include aspects of Pokémon Go gameplay, instead of following familiar characters like Ash Ketchum and Team Rocket?

Whatever the answer, we hope it’s better than Warcraft.