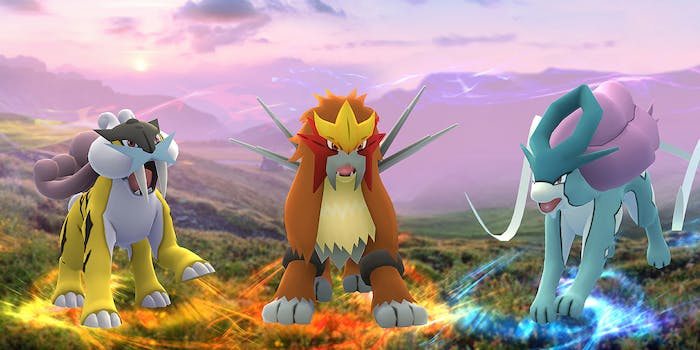 Niantic announced Thursday that for the next month—Aug. 31 until Sept. 30—Pokémon Go players will be able to get their hands on one of the three Legendary Beasts (which are essentially giant dog Pokémon) of Johto that first appear in Generation II. These Pokémon will only be available in gyms during Raid Battles, which has multiple players teaming up to take a Pokémon down for the chance to catch it.

Unlike the Legendary Birds, which started to appear everywhere after a certain date, the release of Raikou (Electric-type), Entei (Fire-type), and Suicune (Water-type) will be restricted by region. Raikou will first appear in the Americas, Entei will show up throughout Europe and Africa, and you can catch Suicune in the Asia-Pacific region.

Pokémon Go will also test out new features for EX Raid Battles (which was known as Exclusive Raid Battles), which will open for certain players as soon as Sept. 6.