They say the weeks since the game's release have been a 'nightmare.'

A Michigan couple has filed a class action lawsuit against the creators of Pokémon Go, claiming that the game has disturbed the peace in their neighborhood.

Scott Dodich and Jayme Gotts-Dodich, who live in St. Clair Shores, Michigan, say that their neighborhood’s private cul-de-sac is riddled with PokéStops, which app creator Niantic did not seek their permission to place. They say that players are parking in front of private homes and driveways, looking in their windows, and walking on their lawns, despite signs on their street that indicate it is private property. Because the street is private, according to the suit, police can’t ticket cars parked the wrong way or in front of driveways. Gotts-Dodich claims one player told her “shut up bitch” after being asked to leave the premises. Nintendo and The Pokémon Company are also named in the suit.

“The past few weeks have been an absolute nightmare for not only my husband and I, but for the residents on our street as well,” Gotts-Dodich wrote in a complaint to Niantic that was included in the lawsuit. “Almost two years ago my husband and I moved into our home, not knowing how drastically our once quiet, safe, and peaceful street has gone to the complete opposite. . . . Most recently I am seeking help for anxiety, I believe I will call it that and am seeking help. I guess you could say I had a nervous breakdown, never had to encounter this feeling in my life.”

The Dodichs contacted Niantic through the company’s website to request that the PokéStops be removed, but they they got nothing more than an automated response. The Daily Dot has reached out to Niantic for a statement.

The Dodichs are not the only family in the area to complain. Others in the St. Clair Shores area told Click on Detroit in late July that the nearby Wahby Park is overrun with players late at night. The park in question has seven Pokéstops and a gym. 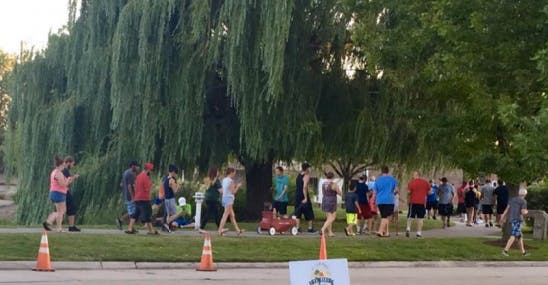 Other lawsuits over the game have popped up in the weeks since Pokémon Go was released. New Jersey resident Jeffrey Marder filed on July 29 claiming that Niantic did not seek permission to placer PokéStops on his property, and that players knocked on his door asking permission to enter his backyard to catch Pokémon.